Written by rosalind renshaw
< Back

A man has been charged following a fire at the New Romney office of Andrew & Co in Kent.

The blaze, early last Friday morning, has damaged the building so badly that staff have had to shut up shop. All the branch's business is going through its Ashford office.

About 40 firefighters tackled the flames after being called out at 4.50am and remaining on site until after 9am.

The fire started in a first-floor flat above the agency and resulted in the High Street being closed to traffic during Friday. 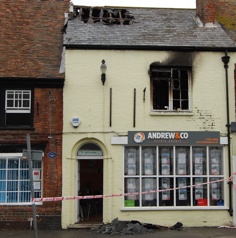