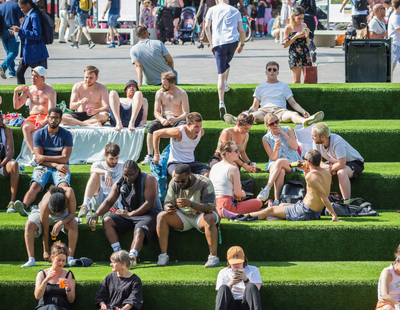 A few weeks ago, we saw widespread disruption due to record breaking 40°C heat in the UK. The extreme temperatures caused issues for transport, including cancelled trains and flights, as well as wildfires and damage to property across the country. All this highlighted the issue of rising global temperatures and the UK’s inability to cope during extreme heat.

Nationwide issues and disruption aside, what can we in the property industry learn from this heatwave, to make sure that we’re prepared for future increases in summer temperatures in the future?

Will heatwaves become a common occurrence in the UK?

A heatwave is defined by the MET Office as ‘an extended period of hot weather relative to the expected conditions’, with the UK having experienced six major heatwaves in the last 20 years.

The MET Office says hot summers are expected to become more common, stating, “The summer of 2018 was the equal-warmest summer for the UK along with 2006, 2003 and 1976. Climate change has already increased the chance of seeing a summer as hot as 2018 to between 12-25%. With future warming, hot summers by mid-century could become even more common, near to 50%.”

“By the 2070s, the temperature of hot summer days shows increases of 3.8 °C to 6.8 °C, under a high emissions scenario, along with an increase in the frequency of hot spells.” With the UK struggling to cope with temperatures just 2°C above the previous hottest day on record, an increase of nearly 7°C is likely to have a profound effect on the way we live, impacting lives and infrastructure on a greater level.

Our homes are ill-equipped to cope with extreme heat

Over recent years, the shift has focused towards making our homes more energy efficient and preventing heat escaping during the colder months. The increase in temperature that we’ve just experienced highlights how ill-equipped our homes are at dealing with hot weather.

A major issue that should be addressed is the way we design our homes, in particular high rise flats and apartments often based in urban areas. These types of buildings make use of large windows that are often placed on one side of the dwelling, making it very difficult for hot air to escape, resulting in overheating and occupants experiencing uncomfortable living conditions.

To combat the issue of overheating in new homes, the government recently introduced a new regulation in June 2022 called ‘Part O’, designed to encourage developers to “provide an adequate means to remove heat from the indoor environment”.

This is a good first step to introduce measures to address excess heat that affects new-build homes, however the government needs to look into ways of how the millions of homes already standing can be effectively cooled and ventilated during the summer months, as well as staying warm during the winter.

One solution is to look to neighbouring countries to see how their buildings and homes are geared up to cope with high temperatures and how our nation could replicate their methods.

Many homes in countries such as Spain, Portugal and Italy make use of whitewashed walls and terracotta clay tiling for roofing, as it’s an effective way to reflect sunlight, allowing housing to stay cool more consistently throughout the day. These methods have been used for decades and could provide inspiration for developing new homes that can cope with the heat more effectively. Whilst this would be a tall order for homeowners to make structural changes to their existing homes, there are other alternatives to keep the home nice and cool that could work for many.

Homes abroad often make use of shutters on windows, which are closed throughout the hottest part of the day, allowing rooms in the home to stay cool and comfortable. Indoor and outdoor shutters are widely available in the UK and can also be used during the winter to keep heat indoors, making them a more viable option for homeowners. The use of awnings can provide shade for both outdoors and indoors too, particularly if fitted over extensive areas of glass on houses.

More cost effective ways to adapt our homes for hot weather is the use of plants to provide natural shading. Planting deciduous trees or plants in front of south facing homes will help to block out the strong sunlight during summertime, but allows the light to flood the rooms in winter when they shed their leaves.

In countries that experience high temperatures more regularly than the UK, air conditioning is another option to keep a home cool and comfortable. According to Energy.gov, air conditioning releases roughly 117 million metric tons of carbon dioxide into the air each year. So whilst it could be a quick solution to cooling the rooms in our homes, it’s not really a viable option for most people in the UK, due to the overall cost of fitting and maintaining a system, not to mention it having a negative impact on the environment.

Should the property market be making changes now?

There is no immediate need to make drastic changes to properties to cope with hot weather, however it’s definitely worth keeping an eye on, to see how the industry and the government reacts to the predictions of more frequent heatwaves in the future.

Whilst the government’s recent ‘Part O’ regulations introduced last month is a step in the right direction, it doesn’t go far enough to address overheating in pre-existing homes and buildings.

Looking at cost effective ways for homeowners to adapt their homes would be an ideal next step for the government to address, as well as continued development to create new homes that allow us to keep cool in the summer, whilst being as efficient and warm as possible in the winter months.

Communication on the issue of climate change and rising temperatures in the UK also needs to be addressed quicker than in recent times. If we’re to see temperatures rise to 40°C more frequently, homeowners, landlords and developers need the right support and information in order to allow us to live more comfortably and safely during the summer months.

Expert Analysis: How safe are homes 5 years after the Grenfell Tower tragedy? ...

It’s the fifth anniversary of the Grenfell fire tragedy, but are...

Adam Day will be a well-known figure to many in the...

Property Natter: this, that and a little bit of something else ...

We’ve enjoyed a bit of an Indian summer this week. Not...