The biggest news story in town this last week – which has brought people who don’t usually like or watch football into discussing our national sport – has of, course, been the furore surrounding the European Super League (ESL).

By any measure, a disastrous move and PR own goal from the clubs involved which backfired spectacularly. In arguably one of the most calamitous launch campaigns of all time, 12 of the top European sides announced their intention to break away to form a new league – without relegation or promotion – where the so-called elite sides in Europe would play each other on a perpetual loop.

The billionaire owners of the clubs involved – many of them American and used to franchise sports – didn’t even bother to consult the main stakeholders in all this, the fans, before arrogantly declaring themselves special enough to create their own closed shop. They didn’t even tell their own managers and players until just before the news was announced.

A furious backlash was inevitable, but the strength of feeling and opposition surpassed anything even the most ardent football fan could imagine. In a huge show of fan and people power, supporters from across the spectrum – including, and especially, those from the ‘Big 6’ clubs who were looking to break away – railed furiously against the idea, as did high-profile celebrities.

Managers and players started to speak out. Parliament and politicians got involved – maybe in part for selfish reasons of political expediency – and Boris Johnson said he would do everything he could to stop the league going ahead.

It didn’t take long for the owners to get jittery, and in an extraordinary day of drama on Tuesday the plans for the ESL fell apart completely. Crumbled. Up in smoke. Gone. All six English clubs involved withdrew with their tails between their legs, with arguably faux contrition and promises to win back the fans’ trust. But much damage had already been done.

A few of the main instigators are still clinging on – insisting that football must change and reform, and that the ESL is the best way of doing that. They have cowardly hidden behind the pandemic, and the lack of fans in grounds to make their voices heard. They have insisted they will be saving football and helping the football pyramid rather than destroying it.

But it was clear this was about one thing and one thing only. Money and greed. Many of the clubs involved – despite being huge businesses and brands – are in massive debt, which has only been worsened by the pandemic.

The way it was handled and conveyed was dismal, making the owners look out of touch, elitist, arrogant and uncaring. For supposedly shrewd businessmen, the way the rollout was handled was astonishingly bad, with a communications void, no-one fronting up to explain the plans, a late-night announcement on a Sunday, players and managers chucked under the bus.

What does all this have to do with property, I hear you ask. Well, aside from many agents and property people no doubt being fans of – or having affiliations with – the clubs involved or just fans of football in general, there is also a link (albeit slightly tenuous) to agency in all this.

Homesearch’s Sam Hunter and love2move’s Mark Worrall discussed it briefly in the latest episode of their excellent The World Class Agency Podcast – which, incidentally, also featured our very own Lee Dahill discussing the secrets behind effective property advertising and marketing. Well worth a listen!

They made the point that, in agency, the consumer is everything. After all, without sellers, landlords, tenants and buyers, agencies wouldn’t be able to function. If you lose touch with the consumer, or take them for granted, that will only lead to bad things. The owners behind the ESL thought they could completely move away from their established fanbase and everything would be rosy, but that notion was well and truly rebuffed.

There are other parallels, too, concerning the dangers of closed shops and monopolies. There is definitely an argument that too much power is concentrated in the hands of the major portals and equally the major corporates, who are becoming increasingly acquisitive right now. Agency relies on variety and regionality; it relies on local experts and community. It should be embedded in its local area – even if, in this brave new world, it doesn’t necessarily need a high street presence.

We have also seen the issues with price-fixing cartels in agency from time to time, while Foxtons – never a firm to shy away from negativity – has been caught up in a fresh fat cat storm thanks to the £1 million bonus received by chief executive Nic Budden despite the company also taking millions of pounds in taxpayers’ money in the form of business rate exemptions and furlough funding. Unlike a number of other agencies, including Knight Frank and Belvoir, and property firms like JLL and CBRE, it has given no indication of returning the public money.

There was a larger than expected shareholder rebellion over the proposals, but not enough to prevent it going through. The saga has, however, led to considerable heat on Foxtons. The company has long thrived on its reputation as a Marmite agency, but it’s dangerous to allow a perception of being out-of-touch and elitist to build.

We’ve seen huge agency consolidation in the last few months – which is inevitable in times of economic crisis and uncertainty – but the danger is that we lose the character and identity of the many colourful and characterful independent agencies out there, just as many football clubs have steadily moved away from their communities in recent decades.

That means it’s more important than ever to shout out about the independents doing things differently. In that spirit, and in an extension to the Independents Day series we ran at the back-end of last year, here I speak to Baljit Arora, director of Orlando Reid, an independently-owned agency operating in London and Manchester.

Your agency has a very distinctive name - where did it come from and was it designed to make you stand out among the crowd?

The name Orlando Reid was coined in 2010, an amalgamation of the names of the original founders of the company, Jack Reid and Gaven Orlando. I took ownership of the company one year after its incorporation, but it was decided to retain the company name.

Can you tell us a bit more about the agency? How many branches do you have? 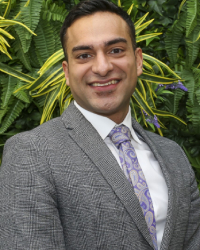 Orlando Reid has flourished since being founded in 2010 and today has three London offices and a Manchester office headquarters.

Our journey began during a recession and developing a new client base was a challenge, but time has seen our market share increase and we have developed into an extremely successful property company.

On your website, it says you do things differently - can you explain how?

The unique culture of Orlando Reid as a company is one of dynamism, innovation and creativity, coupled with the inevitable focus on outputs and results. We are strong advocates for the use of technology in property marketing and see property videography as the future. [For example], 3D interactive tours of our entire sales property portfolio and videos of our team have been particularly successful.

Which of the portals do you currently use?

At present, we utilise all the main property portals, namely Rightmove, Zoopla and OntheMarket. Increasingly, however, we are seeing the power and potential of marketing via social media. Instagram and Facebook are becoming our most frequently used social media platforms.

We predict that the future will see a shift in marketing platforms, with a focus on video-friendly social media pages and content marketing rather than mainstream portals in isolation.

Have you been continuing to work in the office throughout the crisis, or do you have a flexible working policy?

Since the easing of Covid lockdown restrictions, Orlando Reid’s office occupancy has been approximately 50%.

Although our London offices are all high-street based, with a traditional ‘shop front’, we feel there will be a move away from these in the future. We predict that in time, traditional office space will be less necessary as ‘walk-in’ business declines.

Our Manchester HQ is located in the heart of Spinningfields, in a modern corporate office space. We mainly utilise this space for business-to-business transactions, relying less on consumer footfall.

Are there big differences between operating in Manchester and in London?

Breaking into the Manchester market has in some ways been much easier, as our clients feel comfortable and, as such, more receptive, knowing that we have expanded and run a successful operation in the capital.

Manchester has received billions of pounds worth of investment, rendering the prospect of buying within the city incredibly attractive to investors. Rental yields and capital appreciation are still very strong in the centre of Manchester and we recognise it as a hub for international property investment.

Lastly, where do you see your agency in five years' time?

Our vision for Orlando Reid is to develop our brand over the coming years, with multiple offices around the UK. We are specialists in buy-to-let property investment and envisage that Orlando Reid will become a market leader and major global player in this field.

We thrive on working on off-plan developments and have been very successful in selling multiple units quickly, so it is in this market that we wish to specialise.

Thanks for the great answers, Baljit!

As regular readers will know, the Natter kickstarted a series last...