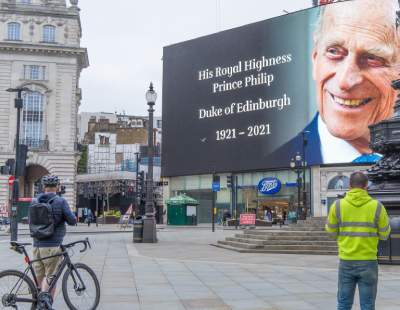 For many, the funeral of HRH Prince Philip will be a solemn affair, while for some it will also be a cause for remembrance - perhaps even a respectful celebration - of a life well-lived with character and duty, and much charitable work besides.

Just a few weeks short of 100 years, his life saw not only tumultuous changes in the wider world but also a revolution in the more fundamental aspects of life - including, of course, the homes of those people who, formally, are regarded as subjects of the monarchy.

This is what the British housing landscape looked like when Prince Philip (or to give him his full name Prince Philip, Duke of Edinburgh, Earl of Merioneth and Baron Greenwich) was born in June 1921.

At that time, as Britain was recovering from the loss of life and economic effects of the First World War, some 80 per cent of people rented their homes from private landlords.

The scale of poverty and poor conditions prevailing in the rental sector at that time, and the bad health of many who went off to war between 1914 and 1918, spawned the pledge by David Lloyd George that he would build a “land fit for heroes.”

The vehicle to create such a land was to be the local authority, and legislation in 1919 and 1924 allowed subsidies for councils to build mostly houses but a small number of flats too.

The London County Council (which later turned into the Greater London Council and now no longer exists) was the most active builder of what were called estates - in Barking, Ilford and Dagenham, for example, the LCC constructed nearly 30,000 homes in a short time.

By the mid-30s, some 500,000 council houses had been built across the UK. A much larger number, well in excess of 2.3m, had been built by the private sector, too, some with subsidies from government - proving that Help To Buy is not a brand new concept.

This was also the time of Metroland - suburbs built in then-leafy areas of Hertfordshire and Buckinghamshire, to satisfy the growing number of wealthy who wanted to own, not rent.

After the years of devastation and hardship of World War Two, some 750,000 new homes were needed, mostly to replace those bomb-damaged or obliterated completely.

Most of the nostalgic reflections now, 70 years on, dwell on Pre-Fabs but in fact only 150,000 of these were built while around one million ‘real’ bricks and mortar houses and apartments were constructed by the mid-1950s, despite shortages of materials.

By 1955 slum clearance was becoming fashionable, with local authority planners regarded as guardians of the future. Tower blocks and new towns such as Milton Keynes were considered ideal, and home ownership began its slow rise as a proper mortgage market was created around what were considered to be (at the time) low interest rates.

Indeed home ownership - which went on to peak in 2001 - was the by-word of the British property landscape in the second half of the 20th century.

Conservative and Labour governments regarded it as a symbol of protection and security for families, and the fostering of community spirit. While the planners’ fetish of destroying older housing to replace it with the new, changed the appearance of many British towns, one strand running through from the 50s to the 90s was the desire for home ownership - never shown to be stronger than during the Thatcher era of council house sales.

Right To Buy peaked early in 1982 with around 160,000 homes sold off across the UK in just one year but it continues even now (in England and Northern Ireland only) in the 2020s; overall some 2.2m homes have been sold this way over four decades.

Ironically, many of those former council properties have found their way into the private rental sector - and it’s the growth of that sector again, to 20 per cent of the total housing stock, that is perhaps the biggest change that will have been seen in British housing towards the end of Prince Philip’s life.

For while there remains an active house building programme - albeit one almost entirely confined to the private sector and typically falling well below government targets - the biggest social upheaval in housing since 2000 has been the growth in private renting.

It is a divisive subject, typical of our divisive age.

Right To Buy, once the flagship of a Conservative government, has plenty of Conservative detractors now who see it as a cause of our long-term housing shortage. And the very governments which once urged people to become landlords to augment their pensions and provide housing for others, are now at the forefront of imposing taxes and restrictions on landlords for taking exactly that advice.

Prince Philip - not troubled by a lack of housing himself, of course - may well have chuckled at the mess elected politicians have made of much of our housing policy.

A person with an insult for most occasions, he once told a foreign dignitary who explained his country had only 200 MPs: “That’s about the right number. We have 650 and most of them are a complete bloody waste of time.”

He will be missed. RIP.

Will The Lights Go On Again In Central London? ...

Almost exactly a decade ago I wrote a blog on the...

Right now it seems that another day means another house price...