In this week's Natter, I focus on the inspiring story of Clare Hughes, who has bounced back in the last 12 months from life-saving surgery on a brain tumour and has, since October 2020, been a Bespoke Property Agent with Adam Day's eXp UK brand.

For some background, eXp - which was founded in the States in 2009 - was brought to the UK by Day in April 2019 to help deliver a more personal and one-to-one service to homemovers. Day was previously an early pioneer of online estate agency in the UK when, back in 2006, he founded Hatched.co.uk.

In this Q&A, I chat with Clare about her history in property, her recent health scare, her passion for running and the advantages of being her own boss.

You've worked in the residential property market for over 15 years, mostly in East London. Can you give us a brief overview of your journey up till now?

I need to update my bio – it’s over 20 years now! I initially worked as a relocation agent as there was a gap in the market in the East London area. At the time ‘relos’ tended to focus on West London and the Home Counties. I moved into agency in 2009, initially on the high street, and joined Purplebricks in 2015.

You recently posted an inspiring video on LinkedIn, which garnered a strong number of views and numerous positive comments, about running 11 miles eleven months after surgery on a brain tumour. Can you tell us a bit more about your case and the care you received?

I have been overwhelmed at the response to that video! The tumour was diagnosed a few years ago and I initially had Gamma Knife surgery at Barts. Unfortunately, the treatment failed to shrink the tumour and in 2019 my health started to deteriorate and it was decided that surgery was required.

It was an invasive 12-hour procedure and whilst the surgeons were able to remove 95% of the tumour, there have been side effects. It was necessary to remove the inner ear, resulting in total hearing loss on my left side. This also has an impact on my balance. I also have a facial palsy which I am learning to live with. I received outstanding care at The Royal London, an internationally renowned teaching hospital, and had a view of the Shard from my bed!

You have taken up running in all weathers since the surgery - what is the inspiration behind this?

Actually, I’m not new to running and have run the London Marathon three times, but deteriorating health had meant that longer runs were not possible. Post-surgery, as my health improved, I was able to go on short runs and gradually increased. To my surprise, just seven months after surgery, I was able to manage seven miles – it was at this point that I set myself a goal to complete a 12-mile run on the first anniversary.

You previously worked for Purplebricks - how long did you work for them and what was behind your reason to leave?

When I joined Purplebricks in 2015, I was excited by their plans to revolutionise the space and to offer an alternate 'structure' for agents to work within. I still hold the opinion that Purplebricks did a lot of good for the market (agents in particular) as they educated great agents on some of the benefits of being self-employed in this space. 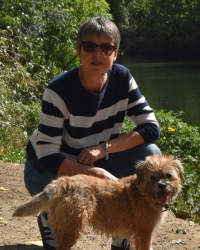 With the benefit of hindsight, I see they've covered many of the educational costs of introducing this concept and for that I'm grateful. The reason I left, ultimately, was because of the poor work/life balance I was experiencing. The model has been designed as such that the agent has to work within a premeditated fee structure which by design limits the amount of commission an agent can earn from a transaction.

Factoring in visiting new customers, taking on appointments, viewing appointments, administration, customer service calls, plus the general day-to-day running of the business, I was living to work and I think this had a detrimental impact on my health. Accounting for the hours I was working (factoring the cost of travel, insurances and equipment), the model just didn't work for me economically.

How did you come to join Adam Day’s eXp? And what support do they offer?

When I gave notice to Purplebricks, I really didn’t have a plan, I just knew I needed a change. I started exploring other self-employed options (of which there are quite a few!) and first learnt about eXp on social media.

A few agents caught my attention with their success stories, so I dug a little deeper. I found that eXp agents have control of the design of their own business, every agent chooses their target market, fees, terms and approach to marketing. I was also particularly attracted to the equity share program which is available to all eXp agents for simply doing their job. I felt the model could offer me the freedom to do things my way, and I haven't been disappointed.

The support within eXp has been incredible. We are all connected through well-utilised technology and if I have questions then Adam (or practically any agent in the business) is there to help. I've embraced video to a large extent throughout 2020, something that I believe will become a cornerstone of my business and I have my colleagues at eXp to thank for their help, encouragement and guidance in allowing me to come out of my comfort zone.

I work for myself, not by myself. I’m particularly excited about my collaboration with Liana Loporto, where we aim to develop a support network for women in estate agency.

What are the main advantages of being your own boss as a 'Personal Estate Agent'? And how wide an area do you cover?

As an independent agent, I offer an end-to-end service which my customers appreciate. I can set my own fees and structure my diary to suit my lifestyle. I concentrate my marketing on East London, however I am not restricted to a geographical area and the last property I sold was in Northwood.

This model of agency hasn't been without significant criticism, but what would you say to critics of self-employed agents?

Self-employment isn’t for everyone, but if you are being asked by your employer or partner agent to build your personal brand within their model, I would ask how that it going to benefit you.

Thanks for the answers, Clare! Best of luck to you in all your future endeavours.

The power of social media

Before I sign off, two viral hits in the last week have once again shone a light on the power of social media. I bang on about its usefulness to agents quite a lot, but it’s much easier to convince people when it’s shown in action.

For all its faults – and like anything with its sheer scale, it has plenty – social media can be a pioneering force for good, a way of bringing people together, of instant exposure, and in the below two cases a source of sheer entertainment.

The fact that a Zoom meeting from a parish council meeting in the North of England can go viral, racking up huge numbers of views and turning the people featured in it into overnight stars, shows the astonishing reach of something like Twitter and YouTube.

Jackie Weaver went, overnight, from being Chief Officer at the Cheshire Association of Local Councils to one of the most talked about people in the country, spawning memes, merchandise and mainstream media coverage. She appeared on The Last Leg, Sky News and Radio 4’s Woman’s Hour, and has even been recreated in a cake.

If you haven’t seen it yet, the 18-minute clip of the Handforth Parish Council Planning & Environment meeting from mid-December 2020, which broke on Twitter at the end of last week and has huge numbers of views on YouTube through various videos, plays out like a perfectly-crafted comedy. It had everything. Armando Iannucci couldn’t have scripted it better if he tried.

It had drama, intrigue, frustration, comedy, ranting and moments of surreal weirdness, and was a perfect summing up of life in lockdown and our newfound reliance on Zoom, with people stuck on mute, cameras not working, people talking over each other and a general feeling of slight chaos.

Well worth a watch, and you can work out if you think Ms Weaver has the authority or not!

Meanwhile, the talented Marsh family from Kent – who went viral during the first lockdown with their cleverly adapted rendition of a Les Mis classic – have hit the headlines again with their mickey-taking take on a classic 1980s power ballad made famous by Bonnie Tyler.

In both cases, just the kind of light relief we all need right now. I’m not saying anything property-related will be going viral in the same way, racking up millions of views on YouTube and trending worldwide on Twitter, but it does once again highlight the reach, exposure and transformative qualities of platforms like Twitter, Facebook, Instagram and, more recently, Snapchat and TikTok. Agents ignore these platforms at their peril.

40 years under the floorboards - the life of a Chartered Surveyor ...

It is a sobering thought that 40 years have slipped by...