“Let’s Zoom later”, “are we Zooming in the morning or afternoon?” “Yeah, I zoomed the client earlier” – variations on these phrases are something we have all become familiar with in lockdown as Zoom has become like a new best friend to many of us.

Let’s be honest for a moment – very few people outside of the business world will have heard of Zoom before the coronavirus pandemic hit. Now it’s just about the most famous product in the country, used by nearly everyone in the UK – from 90-year-old grandmothers to five-year-old kids – at one point or other in the last few months.

It has entered the lexicon in much the same way as Facebooked, WhatsApped and Instagrammed, a word that is now immediate shorthand for video meeting or call. It’s not just been used by businesses up and down the land, though, it’s also been used socially, often replacing Skype, FaceTime and WhatsApp video – the most popular means of virtual conversation before Covid-19 – as the way for people to keep in contact.

Every webinar I’ve been on or have heard about has been held on Zoom, every business meeting I’ve had has used the same platform, every family quiz or meet-up with friends the same. We’ve seen it used by West End and Broadway theatre stars to record special versions of musical hits, at the daily government press briefings to enable ministers to receive questions from the public and media, by programmes such as Question Time, The Graham Norton Show and others to record lockdown episodes, and by comedians, musicians and other creatives to keep spirits up during the pandemic.

But why has Zoom become so successful so quickly? Why not the numerous other video conferencing sites out there, or even popular existing platforms such as Skype?

First and foremost, it’s relatively easy to use and simple in layout. There aren’t lots of different buttons and gizmos to get your head around, it’s pretty straightforward to both host and join a meeting, and it can handle a significant number of people at the same time. Lag is generally not much of an issue, sound quality is good, and the pro version has numerous neat and useful features.

It also has a snappy, instantly memorable name and, like all the best things in life, it’s free – for unlimited one-to-one meetings and 40-minute group meetings, at least.

Even then, the Pro, Business and Enterprise packages range from £11.99 to £15.99 per month, which seems like something of a bargain given the amount of use we’re all getting out of it. Even once lockdown restrictions ease further, it seems likely that virtual meetings and conferences will be the order of the day for some time yet – and may even become the norm – so it makes sense for agents to invest in this software.

Stephen Ludlow, chairman of well-known London letting agency ludlowthompson, told me: “We have predominantly been using Zoom for internal meetings, connecting and sharing with our corporate partners, delivering company presentations and hosting online social events such as quizzes.”

He added: “The ‘business to people’ element of Zoom is not lost on us in that eight-year-olds to eighty-year-olds are comfortable using Zoom and, unlike some other products, it is not exclusively a business-to-business lead product and can be utilised productively to allow the customer access to the business’s ‘black box’. Consequently, we are looking at its wider usage across our platforms going forward, but not on a ‘Zoom for Zoom sake’ basis, rather to use it to innovate around the customer journey.”

A financial services/agency crossover – my story

A few Natters ago I went back in time to the mid-1980s, when big lenders got involved with agencies – to disastrous effect in nearly all cases.

Writing and researching that reminded me of my own time in the financial services industry in the late 80s, and how my career has frequently had plenty of crossover between this sector and estate agency.

From the age of 16 to 20, I worked in the City (on the Stock Exchange floor as a runner). This was at the height of Thatcherism, when big money was swirling around, many people were getting very rich and the City was one of the most exciting and unpredictable places to be on earth.

I got made redundant in January 1988, shortly after the catastrophic Black Monday stock market crash of October 1987. In March 88, I went into financial services on a commission-only basis, (still looking for a proper job BTW!) selling mortgages, life insurance and pensions. Mortgages were easier as people ‘wanted’ them (although I sold everything, to, er, everyone!).

Being commission-only meant that every lead was gold dust, which may well explain my fascination with leads and great customer service. I learnt the hard way the value of a lead, so don’t ever want to lose one.

The key to more mortgages was to get an estate agent introducer – do that and you were made. I approached almost every agent in a 1,000-mile radius to give me their mortgage business. They all slammed the door in my face and told me to do one. I was 20, so not surprising really!

But this led to a fascination with and respect for estate agents. So, in Aug 1991, I set up my own FS shop (Daniels Financial Services) in a secondary position on a housing estate, tied then to Royal Life.

I finally got an estate agent introducer, and then eventually the manager came to me and we put houses in the window, got some for sale boards and became an estate agent. Eureka, I had done it, at 23, so very proud.

I vividly remember having a spreadsheet showing that we had an effective sole agency of 4%, probably way more than our competitors (one of those was Rob Sargent, of Say No To Rightmove fame, up the road. We used to hang out a bit when I was 16/17; he gave me girl advice and drove a yellow Beetle, if I remember right!).

The 4% came from adding all the commission from the policies sold (yes, endowments in there too), plus house sale commission, and dividing that by the house value. So, for a £100,000 house, we would earn £4,000, made up of, say, £1,500 estate agent commission plus £2,500 financial services commission.

I opened hubs, rented window space in insurance brokers’ windows, opened more offices and hired more financial services people. In 1995, I became the ‘top salesperson’ for Royal Insurance in the UK. This was from 1,500 sales guys and gals. I was immensely proud of that (see below). It sounds a bit crass now to say I was number one because I earned the most commission, but you need to remember this was the 90s, the era of Harry Enfield’s Loadsamoney, cool Britannia and rapid economic growth. It was all the rage to be a bit more boastful than would now be acceptable. 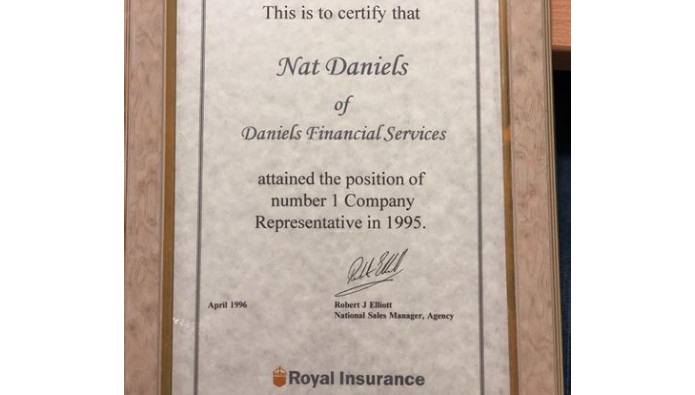 Plus, it wasn’t that I was that much better than the next person, it was that I had such an immense lead flow, all I had to do was sign them up. I didn’t have to look for the leads again.

This is at the heart of why I really value leads and was one of the main inspirations for what eventually became The ValPal Network.

In 1999, just before the Millennium hit, I sold my five offices as I let out my inner geek and invented one of the first property portals (Estate Angels – a lead generator for agents). In reality, it didn’t quite work out, but it was a top 10 property website at the time – in the early days of the internet being actively used by businesses. It eventually morphed into Mortgage Angels, offering lead generation for advisers.

I also set up whowantsmyproperty, an online agency, in 2002/3. It was designed to be a virtual buyers’ box, but we never launched it in the end. Maybe I dodged a bullet there!

By the mid-Noughties, we had so much data (leads) I set up Angels Media to cope with and monetise it. We did this through Introducer Today, our first online publication, in part. I was firmly back in the mortgage industry now – full circle from where I’d started out all those years before.

Then the crash of 2008 came. A bloodbath, a huge ‘oh s**t, what now?’ moment. Like the current crisis, I realised it was a time for news, information, guidance and help for agents, so I approached Ros Renshaw to coax her out of retirement with the creation of EAT, LAT and the other Today publications.

Once the Today sites were fully established and a leading provider of online property industry news, my attention shifted to that long-term obsession of mine – leads. And finding the holy grail of vendor leads. Valuemyproperty.co.uk eventually morphed into ValPal…and here we are.

What’s next? Quite possibly the best thing I have done. During lockdown, we launched the test for MovePal with Drewery Property Consultants (where Facebook ads supremo Paul Long is Managing Director) in Sidcup. Watch this space!

Selling your lettings book? We have the buyers!

We have collated a list of agents who are looking to purchase lettings portfolios, a mixture of the industry’s big-hitters and some regional agents who are in acquisition mode and have funds readily available. In total, there is a £100 million fund ready to acquire any lettings business you are seeking to offload.

If you have business to sell, head here to fill in your details and a team member from The ValPal Network will be in touch for a confidential chat. Alternatively, you can email craig@valpal.co.uk directly.

Why agents need to embrace the incremental revenue ...

It’s easier than you might think. For any agent the challenge of...

This week I carry out a question and answer session with...