Following on from the second half of the last decade, the first few weeks of 2020 have been a bit mad – with ‘Megxit’ and escalating tensions in the Middle East generating all the headlines.

But instead of focusing on geopolitics or the merits (or otherwise) of the royal family, both of which are shaky ground, I am going to concentrate on what I know best: property.

And, specifically, an impressive young man, who at the tender age of just 17 years old is making a splash in the property marketing world.

Jez Parsons, who is based in the market town of Rugby in Warwickshire, labels himself as a videographer, brand ambassador, entrepreneur and student who started his own business aged just 13.

Working with a range of businesses across a number of industries including agency, he has helped each one grow online through his content creation service known as Social Class, which includes Parsons as well as a team of photographers, digital illustrators, Facebook ad specialists and videographers.

He has worked with multiple agents, including Fine & Country and Rubicon Estates, but his closest relationship has been with Sean Newman, owner of Rugby-based Newman Property Experts. He helps produce Sean’s videos, filming, editing and posting them on his social media platforms.

“Working with Sean has been a pleasure as he’s introduced me to a whole new industry,” Parsons tells me. “I film, edit and post all of Sean’s content on his social media platforms, which teach other estate agents how to be a success. His content also shows a personal side to him, letting fellow agents see what he’s taking part in outside of work. From Sean, I have worked with multiple estate agents at Newman Property Experts such as Matt O'Dell, as well as those at Fine & Country, including Simon Hawkesley.”

I ask him whether estate agents and property people should be making more use of videos on social media platforms in this day and age. 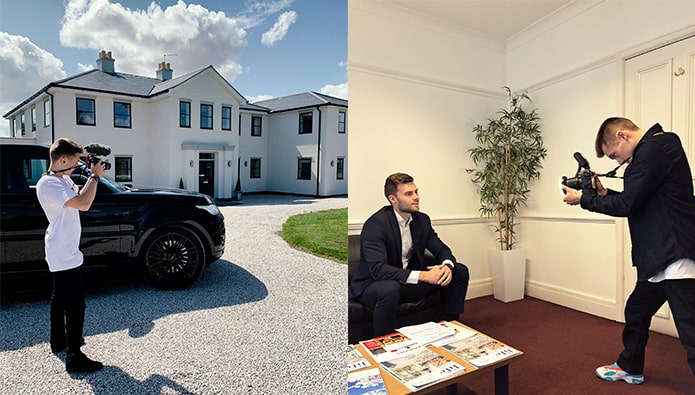 “In my view, the idea of getting your target market to 'know, like and trust you' is priceless, and one of the ways of speaking to those targeted homeowners is through video. You can talk to one person a day for a year and meet 365 people, or you can post a market update video and reach thousands. If a reader learns something from this article, I hope it would be to start creating video content with their camera or even phone to become a better estate agent.”

Having grown up in a thoroughly high-tech world, it’s perhaps unsurprising that Parsons thinks traditional media and marketing will soon be a thing of the past.

“We now see people read books, which should be physical paper products, on a small screen or Kindle, so when it comes to lead generation and marketing all material should be online.”

He cites the example of an advertisement in the local newspaper, a once popular but slowly dying form of traditional marketing, as a reason why online marketing is the future. “Once it’s been sent out, that’s it…it’s gone. Whereas a LinkedIn or Facebook post will last forever, meaning you can send potential clients links to show what you can offer. Unfortunately, traditional media doesn’t provide that.”

How long should videos be?

When it comes to video content, I think it’s always important that you don’t bore or overload viewers. The length of a video is all-important, as is deciding on a clear tone and target audience. With this in mind, I ask Jez what kind of videos he usually makes, how long they are and who they’re targeted at.

“The videos I create typically focus on how to be a successful estate agent; including, for example, step-by-step processes on how to 'Earn £100K' in a year (see the bottom of the article for the video in question). We also produce videos of homes for sale, something which appeals to buyers across the country and makes a physical home a digital asset. They are typically just over a minute long. Nowadays attention spans are shorter than ever, meaning your video needs to be short and simple.” 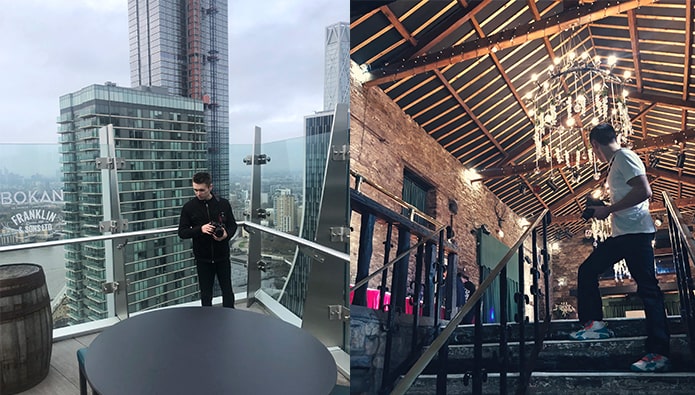 I’m still slightly on the fence about the usefulness of video marketing – does it produce enough results for the time and effort it takes to create? – but in the 21st century there seems no doubt that it should form part of an agent’s overall marketing strategy. And, as the world and agency becomes ever more digitalised and interactive, there is also likely to be an uptick in agents using more visual marketing.

It may also take youngsters like Parsons to inspire and enforce the change that agencies need to make to appeal to the tech-savvy generations of the future.

Thanks very much to Jez for his answers and we look forward to hearing plenty more about him moving forward.

How will our living space look in years to come?

The beginning of a new decade is always a time for big predictions about what the next few decades will bring, and it was with this in mind that Arlo & Jacob’s latest research looked at the potential future of our living spaces.

The findings suggest that, by 2030, windows will be made of adjustable smart glass and residents will be able to adjust the tint and transparency using a remote control. By 2040, attending live events and sports matches will be made easier with the help of virtual reality headsets that will enable users to sync up with live feeds, and by 2050, reusable water will be gracing our homes, with the water from sinks draining into filters and feeding hydroponic plant systems.

Timothy Newsome, marketing director at Arlo & Jacob, said: “Technology is constantly progressing and it doesn’t seem to be slowing down. Living spaces such as the kitchen and living room are a big aspect of our lives, so it’s only right that AR and VR will become more integrated to improve those spaces."

"It’s not just entertainment features that are adjusting with the times, though, things such as personalised sofas that adapt to their customers’ needs will be available by 2040. It’s really exciting to see what the future of living spaces will look like in years to come.”

Last year I looked at the homes of the future, from hands-free, smart homes to eco-friendly properties and Black Mirror-style abodes, and previously looked at whether innovations ranging from AI and blockchain to holoportation and digital mortgages could change the market.

With the pace of change likely to even more rapid in the 2020s, as technology and automation play an ever-more integral role in our lives, it seems certain that our houses will be smarter and more interactive than ever.

While this isn’t without its challenges and possible downsides, including concerns over privacy and data, it will also be fascinating to see the innovations entering the market in the decade ahead – and how much of a role PropTech companies play in this.

For a very long time, it was one of the best...

Property Natter: how to build a brand ...

Good branding is absolutely crucial to any successful business or product,...