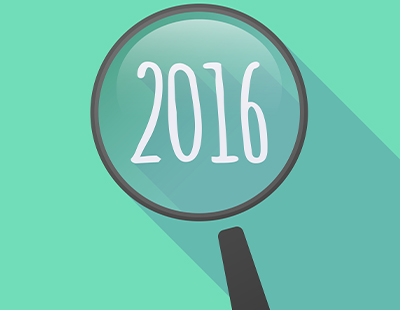 What a mad, bonkers year it’s been. We’ve had, in no particular order: Trump, Brexit, Leicester winning the Premier League, a glut of celebrity deaths, Bake Off jumping ship to Channel 4 and the controversial changes to the shape of a Toblerone bar. You would have had very, very long odds on all that happening this time 12 months ago.

Ed Balls winning Strictly and Honey G winning the X Factor would have put the icing on one very unpredictable, unforeseen cake, but that didn’t come to pass as both finally crashed out last weekend. The joke acts, however, went much further than expected, including in the US elections!

It’s been a surreal, barely believable year. What, though, have those of a property persuasion learnt from it? Here’s my tuppence worth…

If nothing else, 2016 has proved that anything is possible, nothing is impossible and predictions of the future are becoming more and more futile. We can’t say anything with any certainty anymore – which is both alarming and exciting. In an uncertain world, it is those who adapt quickest to the new and make the future their own who will thrive.

Putting aside the politics and personal opinions, the last year has shown that complacency and comfort zones tend to get you nowhere. Change is always inevitable – whether it happens slowly but surely over time or in the form of a bolt from the blue anticipated by no-one. It is those innovators and forward-thinkers, finding solutions to complex issues, who will take hold of their own destiny.

After the year we’ve just had, nothing is off the table - which should be seen as a source of encouragement for the entrepreneurs, business owners, tech gurus and outside-the-box thinkers of this world.

The property market soldiers on

Despite the knocks – whether it be stamp duty changes, Brexit or the ban on letting agent fees to tenants – the property world reacts and adapts to new changes and a new landscape better than almost any other industry. It’s proved in the past how resilient and robust it can be, and it will prove so again.

It is a testament to the property industry and the people working in it that outside economic and political turmoil is mostly brushed aside. Things carry on. Getting on with business, no matter what, is all that counts.

There is a PropTech buzz

Whether you think it’s a buzzword and short-term fad (see also fintech, cretech and buildtech), or something more revolutionary, its impact in 2016 can’t really be denied. Conferences, products, blogs, articles, startups and new ideas galore, round-table discussions, informal and formal meet-ups, big investment from the likes of Zoopla, etc. – PropTech hasn’t just appeared this year, out of nowhere, but it has started to receive a lot more coverage and column inches, which must count for something?

Granted, it’s quite a buzzy, social-mediafied (if that’s not a word, it should be!) phrase, but it does help to encapsulate a big part of what is happening in the property sphere right now. Property and technology combining together to make the lives of all concerned – agents, landlords, buyers, sellers, etc. – that much easier.

As we’ve seen with the recent Black Friday phenomenon and other social media crazes, once these things start to get established, they tend to stay around for the long-term. So, whether you love or loathe the PropTech boom, expect to hear plenty more about it in 2017 (that’s one prediction I am willing to make!)

The future is tech

The robots won’t be taking over our lives for a while yet, but the big leaps forward in AI and VR in recent years gives us a good indication of where we’re heading. People have their own opinions on VR – and its usefulness and effectiveness when it comes to the world of property – but it’s surely inevitable that it will at some point play a key role. The opportunity to view a home, wherever you are, is likely to have mass appeal.

Lots of the tech surrounding VR and AI is still very much in the developmental, experimental stage, but things are becoming more sophisticated, more accessible and more widespread. It doesn’t take a massive leap of faith to see it growing in influence over the coming years.

Speaking of VR, at the bottom of this piece you’ll find a video of me testing out Rightmove’s VR machine at the recent RAN conference.

It’s not just more out-there tech that is changing the face of the property industry, though. Slightly less eye-catching, but becoming an increasingly key part of the property world, is crowdfunding, which is allowing investors to buy shares in homes and PropTech startups to raise the necessary funds to launch various products.

Crowdfunding is nothing new – it’s been around, in some shape or form, for centuries – but the online version is growing in importance as traditional forms of lending remain out of reach for many.

Not to mention underused and underappreciated. Social media might have been around for a fair old while now, but it’s something that too many people aren’t getting a proper handle on.

It can grow, enhance and improve your brand, allow you to interact directly with possible clients, enable you to share the latest industry news and drive traffic to your website. An open goal is being missed here, with the potential of social media too often dismissed and the platforms themselves often seen as an after-thought.

Whereas your website is static in the main, social media is a live conversation that you need to be part of, just as you would if you heard people chatting property at the local school fete or a charity event.

There are still plenty of basic social media mistakes being committed, too. One of the most frustrating is those who like their own Facebook posts, which is bad for two reasons: 1) it’s a social media faux pas and makes you look very silly. 2) It actually changes the way Facebook prioritises your posts in your followers’ timeline. It’s viewed as spam activity and makes your posts less visible.

In other words, Don’t Do It! There are other ways in which social media isn’t being utilised properly – too much content, too little content, bad, unprofessional copy that resembles spam, having a pixelated cover photo/profile picture, uploading photos that are clearly screenshots from your phone/desktop, posting things as “I” instead of “we” when posting as a business, and focusing too much on the hard sell with nothing but links to your own website and loads of property images.

However, with a clear strategy in place, that could be oh so different.

As for 2017…well, I’m not even going to bother. First flight to Mars, anyone?