By Danielle Jones
< Back

Liz runs her own estate agency in Gateshead. When researchers for the Suzy Lamplugh Trust got in touch earlier in the year to find out how safe estate agents feel whilst at work (2016 is the 30th anniversary of Suzy’s disappearance) it brought back memories of a terrifying incident when Liz (pictured below right) was in her twenties, back in 1998.

Those of us working for Suzy Lamplugh Trust were so shocked by what happened to Liz, we’ve asked her to tell her story for Estate Agent Today.

“One of the girls in the office took a call from a man who was selling his home and he wanted a valuation. He gave a number and an address and I went to visit him for a 5pm appointment - it was the last of the day because we shut at 5.30pm.” 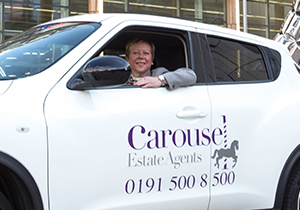 “I arrived and knocked on the door, a man answered - he looked like an ordinary businessman. As I went in, he locked the door - which really put me on edge. I asked if he could unlock it and he said, 'What’s the matter? Am I making you nervous?' I laughed it off and carried on. I had a job to do and I was there to do it - that was my attitude.”

“We went into the lounge and I sat on the sofa to take down the details of measurements etc. and he sat opposite me and began taking his tie off. I felt more and more nervous and then I noticed he was wrapping the tie around his hands, as if to make a ligature - like you would if you were going to strangle someone.”

“I was terrified but I carried on, chatting away, trying to keep my nerves under control. Thank God at that moment my phone rang. It was our office manager checking whether I was going back to base because she wanted to lock up. The first thing she asked me was, “Are you alright?” and I said, “No” so she said she would come to me.”

“When I got off the phone, the man said, “is that your colleague coming to rescue you?” I said he was making me very nervous and that I was only trying to do my job. The minutes until my colleague arrived will stay with me forever. I was so scared. Thankfully they turned up and we left. We reported it to our area manager and didn’t think of contacting the police.”

“Quite unbelievably looking back on it, they asked me and a colleague to return to the property the next day. When we knocked on the door, there was no answer, so we called at the next door neighbours’ and asked whether they knew anything about the man who lived next door. The elderly couple looked confused as they told me, ‘there isn’t a man living next door - the couple that own the place are away on holiday - the property’s empty.’”

“I love my job. 20 years later I now own my own estate agency business but I am sorry to say that 30 years after Suzy Lamplugh disappeared, I don’t think things have changed.”

“We are still incredibly vulnerable. Even this week, I have had the police in my offices after a man threatened to ‘sort me out.’ I had to carry out an inspection on his house because he’s in the process of being evicted and he didn’t like it and took it out on me. But it’s my job to do the inspection - so what can you do?”

At Suzy Lamplugh Trust, we’re so grateful to Liz for telling her story. Our research shows 30 years after Suzy disappeared, almost two thirds of female estate agents still don’t feel safe at work. Consequently we launched ‘Suzy’s Code’ this October -  a set of personal safety guidelines aimed specifically at estate agents and other professionals in the housing sector.

We’ve had an overwhelming response and support - it’s just sad that 30 years after Suzy disappeared we still need to improve safety for estate agents.

To find out more about Suzy’s Code and the bespoke training offered for estate agents can email: training@suzylamplugh.org.

30 years after her disappearance, we still have to learn from Suzy’s story ...

Suzy Lamplugh was just 25 years old when she disappeared whilst...

As discussed in our previous article, it’s all about the first...

Our recent roundtable on the proposed ban on tenant fees generated ten...