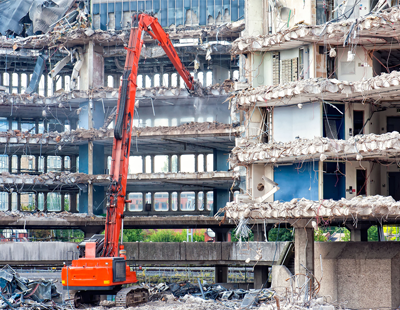 There has been much debate in recent years about Britain’s desperate need for more housing stock. Demand has been outstripping supply for decades, helping prices to soar all over the country. It is estimated that 250,000 new homes need to be built each year; last year only 141,000 were, official figures show.

Plenty of solutions have been mooted. One option that has been talked about frequently is the possibility of building on brownfield sites – urban land that was previously used for commercial or industrial purposes. One of the Conservative Party’s main housing pledges in their manifesto was ‘the creation of a £1 billion brownfield regeneration fund to unlock sites for 400,000 homes, which may involve identification of public sector sites for building’.

Like anything, there are pros and cons to building on brownfield sites. Alongside some expert comment from Andrew Whitaker, planning director at the House Builders Federation, we take a look at why proposals to regenerate them have as many advocates as critics.

According to Whitaker the main advantage of building on brownfield sites is the ability of “new developments to plug into existing infrastructure and services such as drains, comms and roads.”

As many brownfield sites are located within existing communities, the prospect of turning these unused, often ugly properties into something more sustainable is positively welcomed. Brownfields also alleviate the pressure to build on greenfield sites – a controversial act that always draws fierce opposition.

Aside from the environmental advantages, the redevelopment of previously derelict locations can also provide socio-economic benefits. Deprived, run-down towns and neighbourhoods can be revitalised by the transformation of abandoned buildings into new homes. The number of people living in the area will increase, giving a boost to local services and the local economy.

Many of them are former industrial sites that have fallen into disrepair – as a result, they may have to be decontaminated to ensure they are safe. This can come at a considerable cost, with some sites requiring monitoring for 24 months to make sure they are clean.

In addition, existing structures may have to be demolished to make way for new housing. This, once again, doesn’t come cheap.

Brownfield sites aren’t just suitable for residential purposes. Their value tends to be high because of how versatile they can be – they could be just as easily used for commercial or entertainment purposes as they could for housing. While residential development typically provides a large one-off payment for the landowner, other uses could provide a more long-term income from rental yields.

“Lots of different people,” Whitaker says. “Indeed, some redevelopment sites are often owned by more than one landowner meaning negotiations are more difficult and protracted. The public sector owns a considerable amount of brownfield land through old civic buildings/sites.”
While there is a fine balance to be struck between creating enough worth in the land to make the redevelopment viable as well as preserving the character of a given area, Whitaker believes “the reuse of brownfield sites helps make the best use of land and reduces the need for urban expansion (which some people think is a good thing).”

London’s largest and best-known inner-city brownfield site, Battersea Power Station, is an example of how a former industrial powerhouse can be successfully regenerated. The 42 acre patch of land is being transformed into homes, cafes, shops, offices and public space as part of an £8bn development.

That being said, prices for a one bed studio flat in the newly renovated power station (which are still in the process of being built) start from £800,000. There is a fear that houses built on other brownfield sites will be similarly expensive, falling into the hands of wealthy investors rather than those who most need affordable housing.

The proposal of a £1bn brownfield regeneration project to create 400,000 new homes is welcome, but the government’s record on housebuilding in its previous term suggests more work needs to be done this time round.

Certainly, there is evidence to suggest that building on brownfield sites is one way of tackling the housing shortage. Nevertheless, given the potential barriers put in place of such redevelopment projects, it seems foolish to the point of negligence to rely on 400,000 homes coming from this one avenue.

A multi-pronged approach is needed, with regeneration of brownfield sites playing a central role.

A customer service 'WOW' must now come as standard ...

Like many people these days I rarely make a significant purchase...

How affordable is it to buy a new-build house? ...

Affordability has always been a hot topic when it comes to...