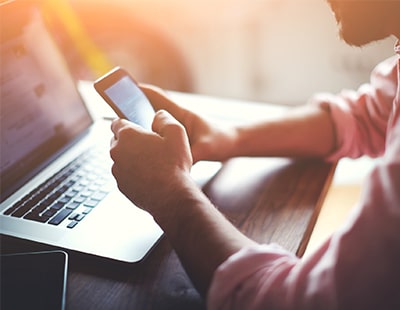 Former Countrywide boss Bob Scarff has warned that estate agents have become too reliant on alerts, emails and text messages for communications.

Scarff, who ran Countrywide’s estate agency division between 2008 and 2015 and founded lead consolidation platform Callwell in 2016, warned that many agents will come unstuck once the market turns and they need to use the “forgotten art of negotiating.”

Speaking on the first episode of OnTheMarket’s new OnTheRecord podcast, Scarff said: “A theme I think you’ll find a lot of people of my generation will talk about prop tech as having made people lazy and I certainly can think of many examples of that in estate agency, but good agents have used technology to do the old things even better than they ever used to be done in the past.

“So it would be too simple to say that it’s made everybody lazy.”

He compared the tasks an agent would have to complete during his time in estate agency 40 years ago such as paper records of appointments and people to chase as well as taking inquiries from newspaper listings.

He said: “It was about keeping an applicant record, keeping a book, a box, whatever it was, with a bit of paper or card, phoning out new instructions.

“Whereas in the old days, if you didn’t pick up the phone and tell people about your new instructions, your price reductions and your backons, then there was no other way of telling them. And it literally was all about getting viewings.”

He added that there is a feeling that the modern generation don’t like to speak on the telephone.

Scarff said: “If that’s true then there’s a lot of people who aren’t going to end up being very good estate agents.

“Because if you can’t talk to somebody properly, if you can’t get what they want, get what you want out of a relationship by talking to them, then you are pretty stuck.

He suggested that online agents have fed into and facilitated this shift, adding: “Unless you’ve got the fight story, unless you’ve got a little bit of colour to add, a little bit of persuasion, good old fashioned persuasion explaining your circumstances, I’m sure there are many deals that haven’t happened because an agent, a proper agent, didn’t get involved in the negotiation.

"When the market turns and it won’t be if, when the market turns, that forgotten art of negotiation will still be alive and well in many agents, but I’m afraid it will have been lost in amongst a load of emails and text messages rather than speaking to people.

“When I started you weren’t even allowed to put in an offer verbally over the phone, you had to go and see the vendor unless the vendor lived outside of the area, it was an empty house and they lived away.

“Even then my boss would expect to see the file with the address of the person where they were living to prove to him that it was somewhere else.

“In every other case you had to go and see the vendor and although maybe that isn’t necessary now, the modern-day equivalent would certainly be having a Zoom call, a video call with every vendor.

- Listen to the full interview

The former managing director of Countrywide has responded to claims made...