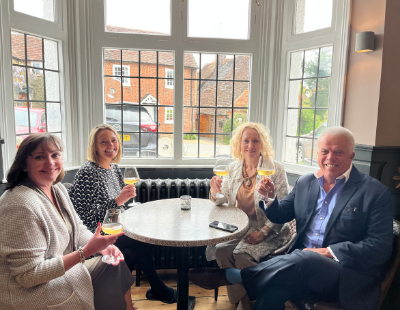 Sussex-based estate agent Mishon Mackay is celebrating 25 years of sevice each for three of its staff members.

Sarah Fitzgerald, Sarah McCarthy, and Angela Farthing celebrated 25 years of service each with managing director Alex Mackay at the Heritage Restaurant in Slaugham earlier this month.

Having joined the business in junior positions at Mishon Mackay between 1996 and 1997, they have grown within the business over the past 25 years.

Shortly after, McCarthy joined as viewings coordinator in the Kemptown lettings office in October 1996.

Farthing started her career with Mishon Mackay at the Hove office as the accountant in early 1997 and now heads up a team within the Hurstpierpoint branch as the company’s finance director.

McCarthy said: “'When I started at Mishon Mackay as a Saturday assistant over 25 years ago, little did I know it would lead to such a fulfilling career that has encompassed such a variety of roles.

“Over the years I have found myself working as a valuation manager, office manager, and finally a sales progressor.

“The team at Mishon Mackay is always incredibly supportive of anyone who wanted to progress within the business, and I can’t think of anywhere better to have spent the last 25 years.”

Mackay added: “This is a huge milestone for Angela, Sarah, and Sarah, and Mishon Mackay is very lucky to have had such loyal and hardworking members of staff helping the business to develop and thrive over the last 25 years.

“I am so happy and proud of everything they have achieved over the last 25 years, and I look forward to seeing what they get up to next.”

Agents Do Charity - we’re back in business with a vengeance… ...

The New Year lull is well and truly over and this...

One of the most high profile estate agencies in the Republic...