If you are an easily offended Frankie Valli fan, look away now.

A regional agent that was rapped by the Advertising Standards Authority (ASA) for alluding to an expletive on a billboard has launched a new swear-free poster.

The latest ad from Lamb & Co, part of its spring advertising campaign, is inspired by Valli’s 1967 hit Can’t Take My Eyes off of you.

It has a new play on words and it is hard to see how anyone could be offended by this one.

The new advert features a lamb with sunglasses and a reflection of the company logo and the phrase, “can’t take our eyes off of ewe.”

It comes after Lamb and Co, which has five branches across the Essex coast, was told off by the ASA last month after a single complaint regarding a billboard at the entrance of Waterglade Retail Park in Clacton.

The poster featured an image of a sheep, alongside large text that stated “What the flock you looking at?”

A complainant challenged if the ad was offensive as it alluded to using an expletive with the word “flock” and queried if the position of the display was appropriate as it could be seen by children.

The ASA upheld the complaint, concluding that the F word it alludes to is so likely to offend that it should not generally be used or alluded to in advertising, regardless of whether it was used in a playful manner.

See the new advert below. 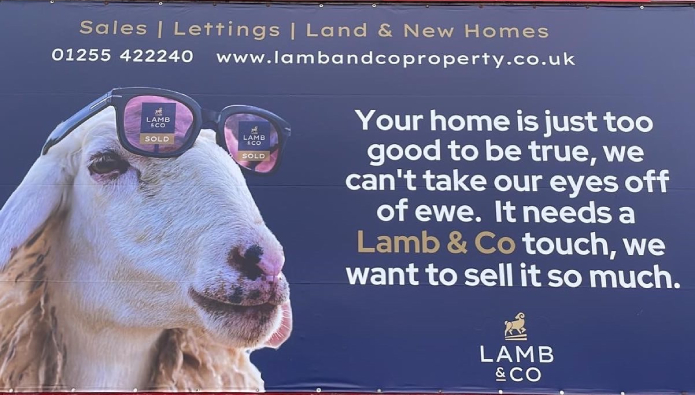 Not sheepish! Agent hits back after watchdog bans 'offensive' advert ...

An estate agent has hit back at the Advertising Standards Authority...