Agents have been getting active in recent weeks to raise money for Ukrainian refugees. 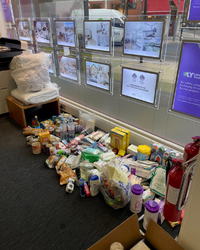 The two have collected financial donations as well as toiletries, clothes and baby items for those affected by the crisis.

On Wednesday, 25 May, Lloyd and John will be driving 1,900km to the Polish border with Ukraine to drop off the donations.

Lloyd said, "Being a new dad, I have been so affected by the agonising hardship that people and families are experiencing in Ukraine and even once they reach relative safety across the border.

“I couldn't just stand there and not try to help. Thank you to everyone who took the time to donate to our cause. Hopefully we can make a small difference to those most in need during a very difficult time in their lives."

If you would like to show your support, Lloyd and John will be accepting donations until Saturday 21 May. The collection address is 251 Wimbledon Park Road, Southfields, SW19 6NW.

Alternatively, if you would rather support financially, a JustGiving page has been set up with a £5,000 target.

Kicking off at 5am on Thursday 19 May, the company’s referencing staff divided into three teams: the Early Birds, the Day Timers and the Night Owls.

Between them they carried out 36 hours of non-stop referencing that will continue until 5pm today.

The idea for the fundraiser came from the firm’s employees who wanted to find a unique way to contribute to supporting the people of Ukraine.

Sarah Higgins, operations director at The Lettings Hub, said: “As a team and business we wanted to do something to support this much needed cause.

“The team discussed cake sales, sponsored walks – all of the usual suspects, but then came up with this unique idea! Referencing is in our DNA.

“We play an important role in helping to find the right home for the right tenants, so it seemed right that we should hold an event to raise money for Ukrainian refugees, many of whom are really in need of safe homes right now.

“I am so proud of how everyone has got involved. We have already raised more than £400 and are hoping to raise at least £1,000 in total.

“It’s a big target but we’re hopeful that people will get behind what we’re trying to do.”

Audley Group: 109 team members from Audley Group, the retirement living provider, gathered on a rainy Sunday on 14 May to take part in the Blenheim Palace 7km run.

On the same weekend, John Nettleton, Group Land Director at Audley Group, set off on an ambitious Tour d’Audley which will see him ride 560miles in just eight days, as well as 14,000 of climbing, while visiting 13 Audley Villages around the UK

The team has so far raised £1,680 for the Audley Foundation with Sunday’s fun run seeing some staff travel more than 100miles to take part.

The runners were welcomed across the line by Jesus Mascarenhas, operations manager at Audley Inglewood and some homemade delights.

Find out more and donate at: https://www.justgiving.com/audley-fdn

Fine & Country: Since 1 April 2022, the Fine & Country network have been clocking up the mileage in an attempt to accumulate a combined distance of 40,070 km, the circumference of the globe in 80 days to support its foundation's charitable work.

Having reached just over the halfway point of the challenge, the network has already covered a distance of 32,012 km, which equates to around 79% of the target distance or a trip from the UK to Australia and back.

Here are some of the latest fundraising efforts so far.

Associates and agents alike from the Fine & Country network came together on 24 April to partake in the East Midlands Tough Mudder event, all in the name of charity.

The 5km course was littered with fun but challenging obstacles varying from mud-slicked walls, cargo nets and rope swings.

The team set themselves a target of £500, which they have managed to surpass and are now looking to reach £1,000.

Find out more and donate at: https://www.justgiving.com/fundraising/eastmidlandsfineandcountryfoundationtoughmudderapril242022 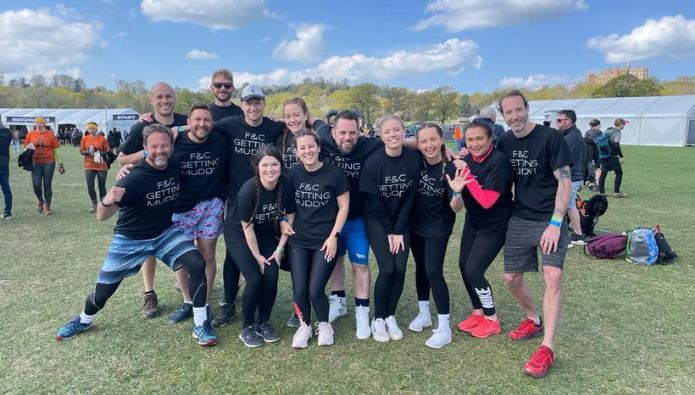 Elizabeth McGing, from Fine & Country’s South Manchester and East Cheshire office, decided the clouds were the best location for her charitable feat.

She said: “Following the reports of over two million women, men and children having to flee their homes in Ukraine, often walking for miles across borders, I decided to commit to jumping out of a plane at 15,000ft - the one thing I’ve always said I would never do.”

With a target of £6,000, Elizabeth watched the donations pour in as she prepared herself for her jump.

She has raised £6,250 from generous supporters.

You can still donate to Elizabeth’s skydive here: https://www.justgiving.com/fundraising/elizabeth-mcging

Haydn Van Weenen and the team at Fine & Country Olney have so far raised £2,000 for The Foundation, primarily through a tennis tournament hosted at Olney Tennis Club.

Haydn said, "Our tennis event was fantastic. We had over 30 Fine & Country boards up around four tennis courts with Ukrainian flags and balloons. Everyone had a fantastic day, and the raffle went down especially well as we had fantastic prizes kindly donated by local businesses.

You can still donate to Haydn and the team here: https://www.justgiving.com/fundraising/haydn-van-weenen1

Jon Cooke, trustee of The Fine & Country Foundation, said: “The more money we raise, the more charities we can support and the more people we can help.

“This includes donations to the Ukraine appeal, ongoing regular office donations by agents within the network and the Grant programme. In the recent Spring Grant Programme, £31,752 was awarded to 16 charities both here in the UK as well as those in other parts of the world.

“With fundraising such as the 80 Days Around the World Challenge still in full swing, we are hoping that we will be able to hit over £100,000 in donations this year. However, this will not be possible with the help and generosity of the public and agents within in the network.”

Find out more and donate through The Fine & Country JustGiving page.

Funds raised will now boost the total of the recently-launched appeal to more than £30,000 in only a matter of weeks since it was launched.

All the funds raised by the Appeal will be donated to the official DEC Ukraine Humanitarian Appeal to provide food, water, shelter and healthcare to those fleeing the conflict.

Lloyd said: “I cannot thank everyone enough for what they have achieved by taking on this very tough coast to coast walk.

“There have been some injuries along the way but we have all survived. I am very proud to have been of this challenge for such an incredibly important and urgent cause.”

The appeal has also been boosted by donations from new property industry sponsors PEXA and Groundsure who have both donated £1,000.

Octane Capital:  The third Octane Capital Cup took place at Goals Wembley on 12 May and raised £1,500 for the Ukraine DEC Relief Fund.

It’s the third time that the property lender has organised this football extravaganza for its brokers, surveyors, lawyers and own staff - and this year was bigger and better than ever.

There were 24 teams competing for the coveted Octane Cup as well as second and third prizes for perhaps the ever so slightly less able players in the form of the Octane Plate and the Octane Spoon.

Howard Kennedy sponsored a BBQ at the event and Capital Surveyors the bar once again.

In each of its two previous years, 2018 and 2019 then interrupted by the pandemic, competition has been fierce and one or two teams have been known to take the event so seriously as to bring along ‘ringers’ including in the form of World Cup winner Robert Pires.

The former Arsenal footballer was sneaked in by PIA Financial in 2019 who, funnily enough, won the event that year.

This year, celebrity appearances included goalkeeper ‘Big G’ from Soccer AM who played in the Octane Capital 1 team and still couldn’t lift the silverware. 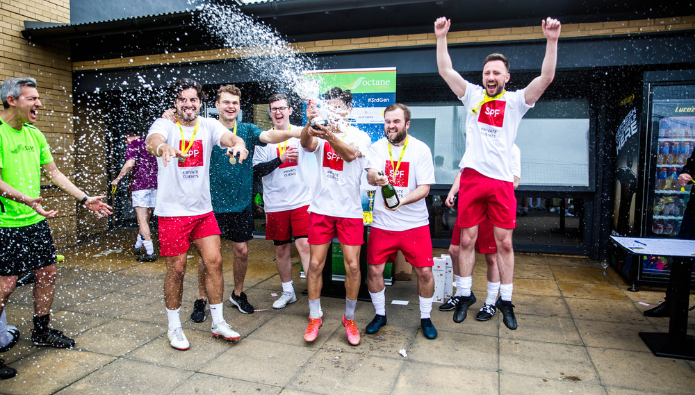 Jonathan Samuels, chief executive of Octane Capital, said: “After a two-year break, the Octane Capital Cup was back with a bang and it was fantastic to bring so many brokers, surveyors, lawyers and Octane people together to have fun and to network like old times whilst also raising funds for the worthiest of causes, the Ukraine Disaster Emergency Committee fund.

“If you think the property finance space is competitive, you want to see its participants playing football against each other for the coveted Cup - because that took competitiveness to a whole new level this year.”

Agents Giving: Agents Giving is returning to the rolling hills and courses of The Morley Hayes Golf Resort in Derbyshire on 1 September.

It is hosting the annual Agents Giving Golf Day, sponsored by Vaboo.

Teams will enjoy an afternoon of golf followed by drinks, a three-course dinner, raffle, and charity auction with Jamie Cooke of auction company iamsold.

The golf day was a sell-out last year with 20 teams attending and raising in the region of £15,000 for Agents Giving.

Spaces are filing up fast so enter your team today to secure your place at this year’s charity golf day: https://agentsgiving.org/event/agents-giving-charity-golf-day-2/

Award winners will be announced at The Agents Giving Charity Ball on 15 July at the Epsom Downs Racecourse in Surrey, sponsored by Callwell and supported by nurtur and Atlas Displays.

You can enter the awards or nominate someone you know who has carried out some extraordinary good deeds for charitable causes in their local community or has undertaken a fundraising challenge for charity.

Agents Giving will also be awarding the Outstanding Contribution Award for Charity - this category sponsored by Propertymark allows anyone to nominate their very own charity person of the year.

The closing date for entries is 27 May.

Find out more at: https://agentsgiving.org/events/fundraising-champion-awards-2022/

A property lender claims to have identified signs that the property...

Agents Do Charity - swinging into action ...