Boy it’s been hot out there - yet even 30 degrees or more have failed to stifle the enthusiasm of our industry for fund-raising.

Thanks to those who have sent in their exploits for this week’s page: please do the same with your fund-raising work, by emailing press@estateagenttoday.co.uk and we will tell the industry of your good deeds.

The colleagues, who are based across the firm’s Leeds, Manchester, Newcastle, Cambridge and Peterborough offices, are attempting to cover a total distance of 5,000 miles in one month by running, walking, swimming and cycling, to support a colleague who has been affected by the condition. Their aim is to raise £1 in sponsorship for each mile completed.

Eddisons director Joseph Fitzsimmons has been clocking up at least 20 miles a day by taking early morning walks as well cycling to work at Eddisons’ Leeds head office from his home in Bingley.

He says: “As a team we are really pulling together to try and reach our 5,000-mile goal, spurred on by the knowledge that the money we raise will help improve treatment and prospects for people affected by brain tumours.

“The Brain Tumour Charity is very close to all our hearts and it is also the world’s leading brain tumour charity and the largest dedicated funder of research into the condition.

“Although not all of us are sporty, everyone is contributing what they can. We’re really determined to push ourselves to reach our goal by the end of this month and have already reached round about the 3,000-mile mark.”

Movember: While most would consider hiking up England’s highest mountain point just once a challenge, Sarah Bilko has set herself the goal of hiking Scafell Pike 100 times to raise money for Movember, for men’s mental health and suicide prevention. Once she has completed the challenge, which is sponsored by The Property Jungle, Sarah will have climbed an elevation of 97,800 meters, which is equivalent of summiting Mount Everest 11 times. Weather permitting, she aims to complete the never-before-attempted task in 32 days, having started on June 27. 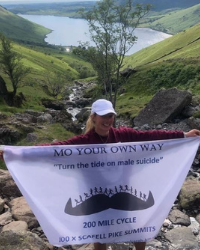 “Working in male-dominated environments and with personal experience, I know there is a serious need to actively encourage the men in our lives to open up with someone they trust, and for everyone to make time to recognise the signs and act to save someone’s dad, granddad, son, brother or partner before it’s too late. The project is to show that the challenge they face in their mind can get easier with help and support” she says, adding that suicide is the leading cause of death in men under 45.

So far she's over halfway through her sponsorship target - you can give here.

The Conveyancing Foundation: This not-for-profit organisation has raised almost £1m for charity since its launch and has won plaudits for its Be Kind We Care initiative to support those in the conveyancing, legal and property industries by asking those working in them to have more thought for how they treat each other in everyday business dealings.

Thirdfort and the Conveyancing Academy have become official sponsors of the Foundation, boosting its vital work in promoting kindness in the industry and providing practical resources to support mental health.

Georgia Davies from the Conveyancing Foundation explains: “Be Kind We Care has really struck a chord within the industry in a year in which conveyancers have been under incredible levels of stress triggered by the challenges of the pandemic such as remote working combined with the surge in transactions because of shifting demographic patterns and the Stamp Duty holiday.

Agents Do Charity - time to nominate your top fundraisers ...

Fundraising frolics by agents and property professionals this week include bike...