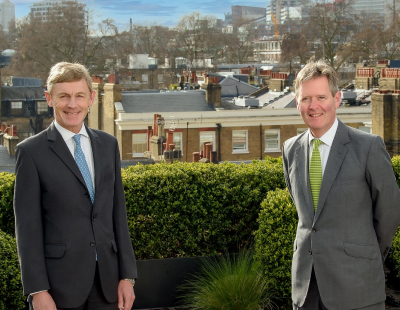 A new name is to appear at the top of Knight Frank from next spring - and he is charged with bringing greater diversity into the company.

It’s William Beardmore-Gray (pictured right) who takes over as the firm’s senior partner and group chairman from April 2022.

Beardmore-Gray, who is currently Knight Frank’s head of the London commercial and global occupier businesses, will also join the firm’s group executive board later this month.

Knight Frank LLP describes itself as “the leading independent global property consultancy” and has existed for 125 years. Headquartered in London, the business has more than 20,000 people operating from 488 offices across 57 territories.

Beardmore-Gray takes over from Alistair Elliott (pictured left), who has been with the company since joining as a graduate in 1983; he became senior partner and group chairman in 2013 and is to retire next year having spent 38 years with the firm.

Elliott says: “I am delighted that William will succeed me. For many years he has been one of London’s most authoritative office agents, before taking on his dual role as head of the commercial business in London and crucially leading our occupier services and agency service line globally. He is also a forthright leader of our agenda to introduce greater diversity and inclusion across the firm. He is without a doubt superbly qualified to lead Knight Frank.”

And Beardmore-Gray adds: “I look forward to working closely with Alistair over the coming twelve months to effect a seamless handover and secure successors for my existing roles … I am excited to have the opportunity to build on this with our teams around the world.”

Two high street estate agents have used the medium of the...

Agency claims 25% sales and instructions boost thanks to global portal ...

Agents should remember to target overseas buyers and tenants according to...

Video tribute to High Street is an agent's superb Christmas gift to us ...

Today, with the festive break around the corner, we have another...