It’s Friday so it’s Charity day of course, and today we get to the root of the issue of lockdown easing and life becoming - slowly, slowly - a little more like normal.

If you’re fund-raising this spring, taking advantage of the restrictions lifting, please let us know and we’ll help lift the spirits and the amount you raise, we hope. Email us on press@estateagenttoday.co.uk and we’ll do the rest.

Now, where are those scissors?

Computers for Schools Appeal: An industry partner who claims his hair is the best in the agency business is shaving it off for charity. 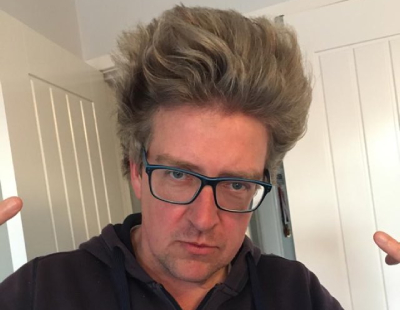 Jerry Lyons runs the Estate Agent Content Club and is saying adios to his impressive lockdown mane to raise £3000 for Stephen Brown's Computers for Schools appeal, which has now raised more than £65,000.

“I've the best hair in the estate agency industry. Just ask Simon Whale, John Paul, or Charlie Perdios, who are also-rans for the title. It's a huge sacrifice to get a number two buzz cut when your hair is this good, but it's for a great cause” says Jerry, who is due to have if all (all?) shaved off on April 27 or earlier if he hits his target and can get a booking.

To support his efforts, visit here.

More than 380 members of the SO Resi team, including a number of directors and senior employees alongside their friends and colleagues, took part in an ‘Around The World in 21 Days’ challenge which required the team to collectively walk, run or cycle 40,075km.

Throughout the 21 days, the SO Resi team surpassed their target and covered a total distance of more than 55,376km.

SO Resi launched its challenge on International Women’s Day on Monday March 8 and selected Womankind Worldwide as its chosen charity due to its partnerships with women’s movements globally to transform the lives of women and girls.

The charity’s goals aims to end all violence against women; provide women with equal economic rights and control over resources; and ensure women’s equal influence in decision making alongside the ability to exercise political power.

Diana Alam, head of sales at SO Resi, comments: “Womankind Worldwide is a charity close to our hearts, working to improve the lives of women and girls across the globe including here in the UK. There has never been a more fitting time to challenge the daily inequalities that women face both in and outside of the workplace, and we are thrilled that so many of our SO Resi team got involved to help fundraise.

“We set an initial fundraising goal of £3000, so are blown away that we surpassed this target thanks to the efforts of our SO Resi team and the support from colleagues, friends and family.”

OnTheMarket over the moon about latest court victory ...

Hello and welcome to the end of a busy, busy week...

Agency’s appeal TODAY for goods and equipment for Ukraine ...

A leading London agency has launched an urgent appeal for goods...