Chancellor Rishi Sunak will extend the stamp duty holiday deadline until the end of June - a three month extension.

The lead story in The Times this morning says the extension - following a fierce campaign by agents, property commentators and economists - will be announced in the Budget on Wednesday of next week. The article is written by the newspaper’s well-connected political editor Steven Swinford.

What isn't clear is whether the extension is three months for all current and new buyers of properties up to £500,000 - thus creating a new cliff edge - or a 'tapered' extension only for current buyers.

The extension is precisely the same length advocated yesterday by the Building Societies Association.

The BSA says that with the March 31 cliff edge deadline fast approaching many buyers and sellers, who have already agreed sales and have mortgages approved would be unlikely to complete the transaction within the deadline.

The BSA believes that a tapered end would allow any house purchase where the mortgage approval has been granted by the end of March, an additional three months to complete while still benefiting from the rate reduction. In addition to supporting homebuyers who are likely to have budgeted based on the Stamp Duty saving, a taper of that length would also ensure that lenders and conveyancers could manage operational pressures in a Covid-secure way, the association believes

The Times also says the Budget next week will see the extension of the furlough scheme for up to another three months - it was due to end on April 30.

Swinford's article also suggests the Chancellor will commit to raising Corporation Tax over the duration of the current Parliament, which still has almost four years to run. The increase could ultimately be from today's 19 to an eventual 25 per cent, the newspaper says, adding that the new US treasury sectretary is also using a rise in corporation tax to help fill the fiscal black hole caused by Covid spending. 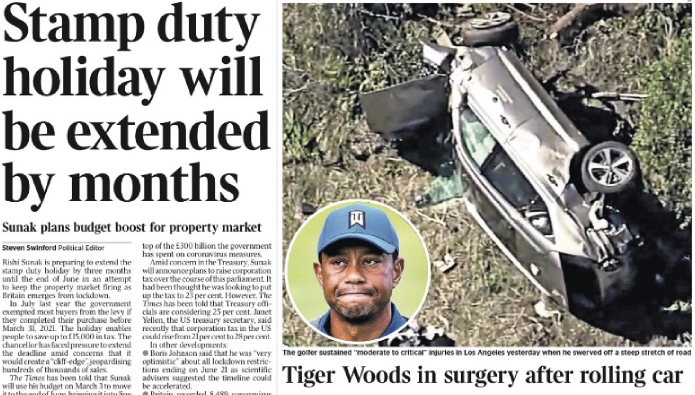 No mention is made in The Times article about Capital Gains Tax, which has been the subject of speculation in recent weeks following an Office of Tax Simplification report last year urging increases to bring it more into line with income tax.

Quarter of agents set to recruit within the next year ...

A quarter of agents say they intend to recruit new staff...