A torrid period for Purplebricks' share value means it opens stock market trading today with a price of just 33p.

This is less than seven per cent of its all-time highest share price of 514.5p back in August 2017.

Purplebricks’ share price dropped 37 per cent in just one day last week following a profits warning over its “challenging” past six months - even though five of those months were during the stamp duty holiday, when most agencies enjoyed bumper business.

Unlike many dramatic falls in share prices, this one was not followed by even a partial recovery the next day, Friday: instead, the share price ended that day unchanged at 33p.

This was not part of a pattern across the agency sector. For example Belvoir, Winkworth and Rightmove all saw share prices rise last week; those that did fall saw only small losses a fraction of the scale of Purplebricks.

The dramatic value fall of late last week - coming on the back of a new pricing model and a bid to bring self-employed workers in-house as fully-employed staff - has been greeted with little sympathy from some in the industry.

Anthony Codling, a long standing critic of the agency and now the PropTech entrepreneur behind Twindig, says: “The market has disrupted the disruptor more than it has disrupted the market. … We believe that internal disruption and change has led to significant underperformance. If Purplebricks trading update tells us anything it is perhaps that in both strong and weak markets homeowners currently prefer to pay estate agents upon the successful sale of their home rather than before it is sold.”

The Motley Fool, an online advisory service for investors, says: “Had I invested when the company’s valuation peaked back in 2017, I would have lost 93 per cent of my capital, on paper. If this isn’t a lesson on the need to stay diversified within a portfolio, I’m not sure what is.”

Meanwhile the bad news for Purplebricks keeps on coming with a new league table showing market share of all major estate agency brands in the third quarter of the year makes uncomfortable reading for the agency’s investors.

Property industry consultancy TwentyCi has produced the league table which still shows Purplebricks as the single agency brand with the largest market share; however, its 3.0 per cent share is 22 per cent lower than in the same period of 2020.

This apparent retrenchment for Purplebricks comes despite its high-profile, and undoubtedly high-cost, advertising compaign during the Olympic Games.

The largest growth in the league table has been secured by Strike, formerly HouseSimple; its share of instructions grew from 0.65 per cent in the third quarter of 2020  to 1.07 per cent in the same period this year - an increase of two thirds, and three times the growth rate of its nearest rival.

Strike’s performance - buoyed by its ‘free to sell’ offer and expansion into new territories of the UK - may be the start of larger movement, as it currently covers only 40 per cent of the country.

Agencies joining Purplebricks in losing significant percentages of market share include online rival Yopa (down 12 per cent), Winkworth (down 22 per cent), and London’s Kinleigh Folkard and Hayward (down 14 per cent).

Significant growth in market share of 20 per cent or more, in addition to Strike, was recorded by Haart, Martin & Co, Fine & Country and Bridgfords.

TwentyEA says: “In 2021, so much of the world is accessible digitally and not physically, but the same concept applies online as it does offline.

“In other words, consumers will view the largest estate agent brands as those that they see most often in the area they are searching for on the main property portals. For example, Rightmove, Zoopla or OnTheMarket.

Here’s the TwentyCi league table below. 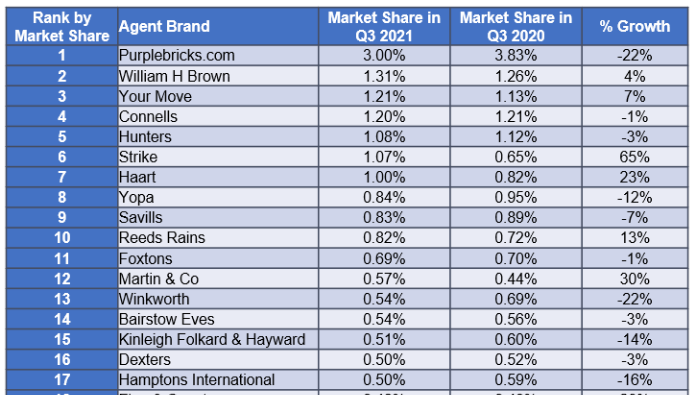 Online agencies’ market share creeps up thanks to richer sellers ...

The market share of the online and hybrid agencies combined has...

Falling market share for online agencies - are they doomed to fail? ...

The market share of hybrid and online agents has fallen again,...