The Nested online agency, which recently revamped its business model to attract more self-employed agents, is expanding outside London for the first time.

Having had some years operating only within the capital Nested says it's now expanding to include Brighton on the south coast.

The new Nested agent there - called an area partner - is to be Jennifer Macdonald, formerly of Dexters. 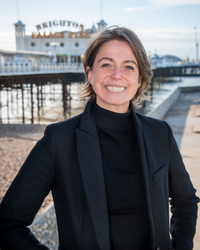 “I grew up in Brighton and so it’s fascinating to see how my hometown has changed over the years, particularly the property market. In the last 20 years alone, house prices have rocketed by 244 per cent and the current market is very different to what it used to be” she says.

“But while the Brighton market has evolved, the way we buy and sell homes hasn’t really moved with the times and so I’m incredibly excited to bring a new era of estate agency to Brighton’s homebuyers and sellers.”

She continues: “Partnering with Nested has allowed me to do this, providing me with the support and freedom to build my own brand, while giving me access to innovative technology that puts the customer at the heart of the selling process. This customer centric approach was probably the biggest draw for me.”

Nested recently announced it would spend £5m on attracting new self employed agents operating under its brand name across the country.

Back in March this year Nested - which had already secured £20m in past funding - announced it was to receive £5m from the German Axel Springer publishing empire, which also invested in Purplebricks.

Nested formerly offered a 'guaranteed buy' of a vendor's property if it did not sell within a set period for a minimum price, but now the agency has changed direction and is promoting what chief executive Matt Robinson calls "our Modern Estate Agent offering”.

It plans to launch in 100 locations in the next 12 months and on its website it says: “Not only are we first-class estate agents. We are also buying agents and chain specialists. The first estate agent built specifically for home movers, from sale to settled.”