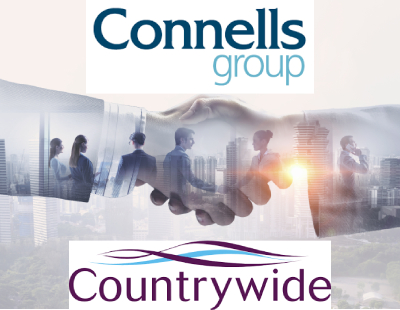 Connells, which already has the explicit support of a majority of Countrywide shareholders for its takeover of the company, has now purchased the shares of its former rival.

Private equity firm Alchemy Partners - which was already a shareholder in Countrywide - at one time put forward its own bid to run Countrywide, winning backing from over 40 per cent of others Countrywide shareholders.

The Alchemy proposal would have allowed Countrywide’s existing shareholders to sell their shares at 250p a share to Alchemy, and would have seen a recapitalisation of Countrywide to the tune of £70m, fully underwritten by Alchemy.

However - in the light of Connells’ successful rival takeover proposal for Countrywide - Alchemy announced just a few days ago that it had dropped all plans of mounting any further bid for Countrywide.

Now in a further twist, Connells has announced that it has acquired the entire shareholding of 895,360 Countrywide shares held by Alchemy, representing approximately 2.73 per cent of the total share base of Countrywide.

This further secures Connells’ position, ahead of a special virtual meeting of Countrywide shareholders on February 15.