There’s been a surprise appointment as OnTheMarket chief executive.

Instead of popular acting CEO Clive Beattie - who had made it known he wanted the position on a permanent basis - the portal has instead named Jason Tebb, a former manager at Foxtons.

Tebb, 45, has for the past three years been group chief operating officer of property development and finance company Ultimate Holdings. 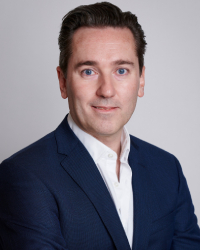 He has two decades of experience in the agency industry, including management positions at Foxtons, LSL Property Services and Chestertons. He also launched his own agency, Ivy Gate.

Tebb, in a statement this morning to the portal’s shareholders, says: “As a business, OnTheMarket has solid foundations with strong operational momentum, and there are clear opportunities for growth by working with the estate agent community to develop our differentiated portal offering; build a profitable, sustainable and technology-led business; and deliver value for our stakeholders.

“I’m really looking forward to progressing the platform and delivering an expanded range of related, value-add products, services, features and solutions for agents and consumers.

“Having worked in the estate agency sector for the last two decades, I have first-hand experience of every size of business, from a single office independent to the largest of property PLCs.

“I believe that this gives me a true understanding of the challenges agents face today, and I’m really looking forward to engaging with our client base to understand what their businesses need, both now and in the future, and how we can best support them going forwards.”

On March 9 this year OTM announced the sacking of Ian Springett with immediate effect.

The company said at the time that it believed a new CEO would be better able to oversee the next stage in the development of the portal “and its commitment to becoming a strong, agent-backed, profitable and technology-enabled business.”

Chief Financial Officer Clive Beattie agreed to take on the additional role of acting CEO and made it clear he wanted the post permanently.

Beattie joined OTM in March 2017. Having qualified as a chartered accountant with PriceWaterhouse he spent 12 years working in investment banking with UBS before working six years at ThruVision, a security technology business, initially as CFO and then also as CEO. He then spent three years at Croft Associates, a business specialising in radioactive material transport.

Non-executive chairman Christopher Bell says in this morning's statement: “We are delighted to welcome Jason [Tebb] to OnTheMarket.  Following a thorough evaluation of candidates, we believe Jason has the skills and sector experience to take the group forward and achieve our objective of building a strong, agent-backed, profitable and technology-enabled business.

“Jason brings considerable experience in the property industry, particularly having previously run and grown a successful estate and letting agent, which will help drive our ambition to become the portal of choice for agents and consumers.”

A long-standing critic of OnTheMarket, who was once excluded from a...

OnTheMarket, which a few days ago indicated it was in profit...