I was giving an interview this week for an upcoming conference - yet another to convert from a physical to a digital offering - and they asked me an interesting initial question about failure. Why do PropTech’s fail?

It made me reflect for a while before answering. It made me consider the countless times I have heard people say “PropTech is simply creating solutions for problems that just don't exist” and whether this indeed was true.

Whilst it may be true, it isn’t the reason they fail and that is what I want to review today.

Why? Because I am beginning to lose count of the number of people that are getting in touch with us to either find a job or to start up their own PropTech business.

If this is you, then there is one very important reason businesses fail and it is going to be a key driver to whether PropTech’s establishing now, or scaling now, will succeed.

Let me take a step back first and give you a macro view of the PropTech landscape for a second.

At the time of writing, we are tracking 8,179 PropTech firms. In addition to this, there are now 424 companies that are now tagged as inactive. They failed.

If you look at the scale of growth in this PropTech market over the last few years, 2015 was the peak for global PropTech businesses being established as this basic graph below shows. 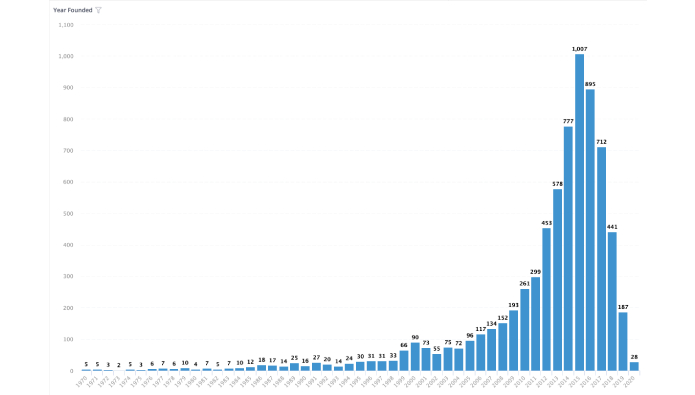 The story is slightly different in the UK with there being an obvious wave from 2015 through to 2018, perhaps offering explanations for this feeling of PropTech fatigue that some felt.

Just a point of note about the seven companies that have originated in 2020 - six of them are focussed on residential. It seems, when I delve further into the figures, that the residential focus had a slight lag on commercial and now there is an overwhelming bias - perhaps because there is still life in the resi market which is just simply not there yet in commercial.

One thing I am aware of, however, is the similarity between this graph and the first peak of a Covid graph. The overwhelming and almost exponential growth is all apparent but slowed in the last two years.

However, like we are starting to see here in the UK, I am expecting a second but smaller spike in 2021 with new models created given the Covid situation as new businesses are created off the back of the pandemic. 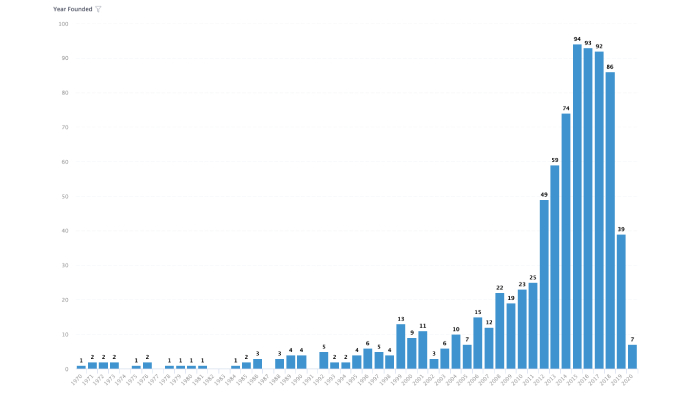 Equally, I am expecting to see that figure of 424 inactive PropTech companies increase. Partly because Covid has made business models obsolete, but also because venture money has dried up in some cases. If these businesses were in anyway speculative with no proven business model yet, funding has all but dried up.

But this isn’t really the actual cause of the failure. Let's get to the nub of the issue.

“Tech, Team and Traction” is the historic mantra of many venture capital (VC) firms. Analysing each, in turn, suggests whether a firm will actually thrive and offer the returns expected. This then determines investment.

Delving into that in a bit more detail, “Product, Market, Fit” is the mantra of many a startup. That really informs whether there is enough ‘Traction’ to make the product/service viable. Ultimately, does the product work for the particular market they are focussing on? A key indicator for many that there is something exciting (or not) apparent.

Furthermore, is the founding team the right mix? Do they know their market? Are they influential? Are they skilled enough to make it happen? Ultimately, are they the right people to invest in?

Lastly, we have the ‘Tech’ element of it all. Does it actually work? Will it scale? Is it resilient? To use Buffet speak, is it protected by a “moat” and therefore defensible to competition?

If all three elements of the venture capitalist’s mantra can be answered satisfactorily, the PropTech is dubbed a ‘winner’ and sent off to become a unicorn.

But, there is one huge thing missing in all of this. There is a huge element very few people ever get right. It trumps Tech, Team and Traction every time.

It is something almost unpredictable. VC’s who invested, just before Covid struck, into business models that are no longer relevant, will be rueing the day they even considered investing because of it.

There is one thing that separates everybody and everything else.

You can build the best team, have tremendous early success with the best tech stack available but still fail.

Conversely, you could build an okay team, with little tech or traction and actually succeed.

That is because one thing trumps the rest of it put together.