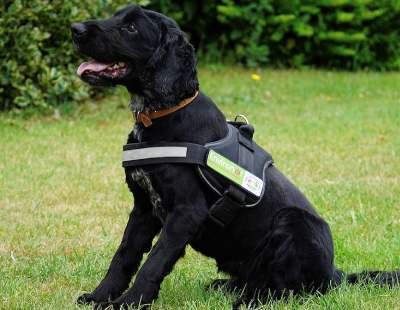 One of the most prominent companies involved in identifying and treating Japanese Knotweed has recruited a new member of the team - and he’s got four legs.

Cocker Spaniel rescue dog Buddy has, according to the company, “an exceptional nose for tracking” and so becomes the company’s third canine in the detection team - two labradors called Mick and Mack were signed up earlier in the summer.

The sniffer dogs check the property for the scent of knotweed rhizome, including where it’s concealed beneath the ground. The dogs can cover a garden or development site in minutes and will indicate by freezing and staring at the spot where knotweed has been detected.

Japanese knotweed dog detection surveys are now being marketed to homebuyers worried a property may be affected by knotweed, and increasingly to sellers who want to offer additional reassurances, particularly if a property has had knotweed in the past.

Agents have had significant problems completing sales of properties with JK, which can grow by 10 centimetres per day to reach up to three metres in height.

It’s described by the Environment Agency as “indisputably the UK’s most aggressive, destructive and invasive plant” and can cause extensive damage to property, breaking through cracks in mortar, brickwork, joints in concrete, drains, sewers, driveways and even the cavity walls of our homes.

If a property is affected by knotweed, sellers are required by law to declare it during the conveyancing process. Mortgage lenders require evidence of a professional treatment plan to be in place before lending on an affected property.

Nic Seal, founder and managing director of Environet UK, says: “We’re delighted to be expanding our detection dog team so soon after the launch with the addition of Buddy. He’s already proving himself to have an exceptional nose for knotweed and infinite enthusiasm for the job.”

A homeowner in London has won a legal case against a...