Hello and welcome to the end of the week and the prospect of a sunny weekend.

We appreciate fund-raising is difficult with social distancing and other restrictions, but you are finding some ingenious ways to do great work despite all this - and we would love to help you.

Drop us a line at press@estateagenttoday.couk and we’ll let the industry know.

Sanctus: An estate agency in Chelmsford has donated £250 to help the vital work a local charity is doing to support the homeless and vulnerable.

Martin & Co gave the money to Sanctus which provides a range of services to people including free food and drink, counselling and helping people to return to work, as well as improving their literacy skills.

Agency owner Steve Frost says: “It’s been a tough time for everyone but especially the local charity sector and homeless and vulnerable members of our community.

The work that the people at Sanctus do is incredibly important and positively life-changing for those who benefit from it. We’re proud to be able to help them in a small way.” 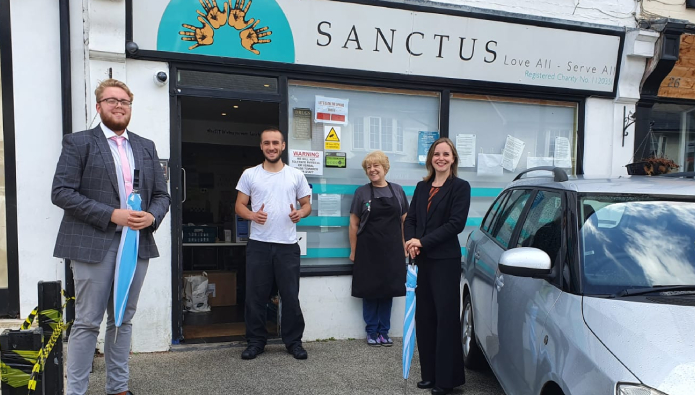 And Sanctus administrator Harriet Vader adds: “Martin & Co’s donation at this time was amazing and it will certainly make a difference to our Service Users who are coming to the daily soup kitchen.”

Crohn’s & Colitis UK: An estate agency in Tooting has answered a charity's call for help by donating £200. Next Steps, based in Mitcham Road, donated the money to Crohn's & Colitis UK.

The charity provides advice and support, including an information-packed website and guides which help anyone affected and educate friends, family, medical professionals and even employers about the disease's impacts.

The agency's owner, Asad Khamisa, says: "We saw the appeal for help by the charity on its website, and we wanted to help in some small way. The work the charity does is incredibly inspirational and helps to make people's lives a little bit more bearable and more manageable. We're proud to be supporting them.”

Meanwhile a Crohn's & Colitis representative comments: "We are so grateful for the donation from Asad and the Next Steps team. It will help us to help more people across the area."

Parsons Sons & Basley Community Campaign: This Sussex agency has launched a new campaign to support charities and not-for-profit groups and services hit by the virus crisis. This brilliant agency is offering £500 every quarter to help deserving causes within Sussex.

The business wants good causes to write in - anything is permissible as long as it is not-for-profit and benefits the people of Sussex.

Details of the top three nominations, as chosen by PS&B’s management team, will be announced via their Facebook page, giving the public the chance to vote for the project or cause they feel deserves the donation the most.

“We have been serving the South East for nearly 200 years as a business, and want to give something back to the areas we live and work in” explains agency director Michael Barber.

The first £500 donation will be awarded in September and nominations should be submitted to psandb@pmwcom.co.uk by midnight on August 31.

Agents Giving/The Guild: The Guild of Property Professionals is using the size of its 800-strong network to make a difference by donating £50 to Agents Giving for every successful referral completed.

Guild chief executive Iain McKenzie says: “If each agent from the entire network makes one successful referral a month that completes, it would equate to a potential sum of approximately £40,000 a month and around £480,000 in a year. That is a substantial amount of money that would be going to Agents Giving to be able to make a massive difference to a number of charities supported by the organisation.”

He adds that around 25 per cent of leads are converted to instructions, of which 50 per cent are completed.

“Essentially that means that just one referral per week by every Member with the known conversion rates into business will deliver the level of completions we need to hit the target, which should be easily achievable. It is a great incentive for members to make the referrals, while helping people and giving something back” adds Iain.

Agents Giving chairman Michael Stoop comments; “We would like to say a tremendous heartfelt thank you to The Guild and their Members for this wonderful show of support to Agents Giving the Industry Charity.  Your donations will mean we can continue to help support the industries fundraising efforts through the Agents Giving Grand fund ensuring more of the money raised goes directly to even more UK charities on a national, regional, local and community level which is so important during these current times.  We look forward to seeing the partnership flourish.”

We’re into Christmas week and the distant rumble of sleigh bells,...