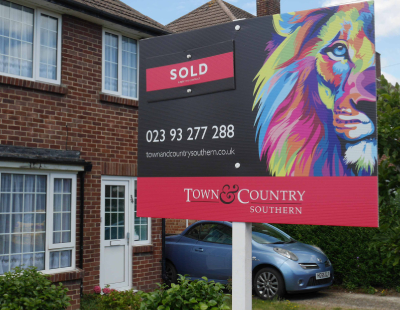 The debate over whether For Sale boards remain a valuable source of publicity has been in the headlines of late - but one agency is convinced boards are the secret to winning the lion’s share of the local housing market.

In and around Portsmouth the Town and Country Southern agency has launched a striking new board design featuring a prominent male lion’s head.

The firm has left no pun unturned in its bid to become king of the local jungle.

“We want people to know they are in with the ‘mane’ chance of selling when they instruct us to market their properties” says Colin Shairp, who founded the agency a decade ago and has a career selling properties in southern Hampshire for more than 30 years.

“Town and Country Southern sells a great many family homes and I thought this really colourful sign would catch the eye, especially of children. I had done an audit of our old boards and we only had a small number left so it was a good time to strike out with a really effective replacement” he says.

“We perform consistently well in reviews from clients and have just been named the best residential sales agency in Hampshire in the top-notch ESTAS awards, based on client recommendations, so we have plenty to roar about! We definitely take pride in our work!”

Do you have striking and unusual For Sale boards? If so, please do send us a photograph or video - just pop it to press@estateagenttoday.co.uk.

And if you want to catch up with the debate about boards, please have a look at this story about one London borough, and check out our latest PropTech Today column on this subject by James Dearsley.

It CAN be done - sales agreed totally thanks to virtual viewing ...

An estate agency in Portsmouth has sold a house subject to...

Agency promises not to make competitor comparisons in future ads ...

The Town and Country Planning Association has plunged itself into the...