Controversial Housing Secretary Robert Jenrick is the subject of a harshly critical cartoon in The Times which depicts “pigs in the trough” - a reference to a growing number of allegations about his decisions on recent planning issues.

There is also likely to be a debate today in the Commons about Jenrick’s decisions, instigated by Labour.

The initial controversy concerned a planning decision made by Jenrick, against the advice of planning officers, for a £2 billion 500-apartment London housing scheme led by billionaire former ‘adult entertainment’ and newspaper owner Richard Desmond.

Jenrick gave the go ahead some weeks after meeting Desmond at a Conservative fund-raising dinner and viewing details of the scheme on Desmond’s telephone; some weeks after the decision was taken by Jenrick, Desmond made a contribution to the Tory party. 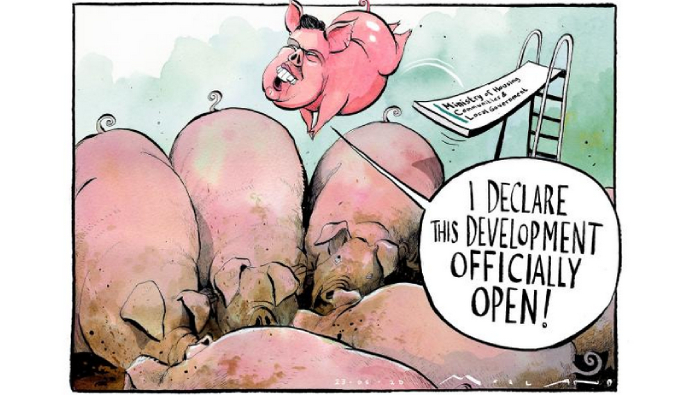 Recently Jenrick’s decision was declared illegal - and accepted as such by his own Ministry of Housing Communities and Local Government.

Cabinet Secretary Sir Mark Sedwill is reviewing documents relating to the decision, with Labour calling for a formal investigation.

Now both The Times and the Daily Mail have printed details of another controversial decision, when Jenrick allegedly intervened in a development project backed by prominent Conservatives and party donors.

It concerns the Jockey Club and its development of 318 homes and a hotel at the Sandown Park Racecourse in Esher, Surrey. The Jockey Club launched an appeal after Elmbridge council rejected the application because it was on Green Belt land and would deliver only 20 per cent affordable housing, falling below the council threshold of 40 to 50 per cent.

The Times says Jockey Club board members include Baroness Harding, the Conservative peer behind the government’s Covid-19 tracing app.

Jenrick and the MHCLG deny any wrongdoing.

Housing Secretary Robert Jenrick - currently at the centre of a...

Media reports over the weekend suggest the government is preparing a...

Home owners in England will be entitled to add up to...