The Say No To Rightmove campaign has launched a countdown clock on its website to galvanise agents into remembering only 85 days remain before their fees rise 300 per cent.

The campaign says the clock will tick down to what it’s calling D-Day - that’s when Rightmove’s current 75 per cent discount ends and a decision has to be taken by agents whether to leave the portal, depending on what it says about future charges.

In an interview with Estate Agent Today, the Say No To Rightmove campaign leader Rob Sargent - head of the Acorn group of agencies - says the movement now has some 1,500 agents representing 3,000 offices once pending members are checked and verified. 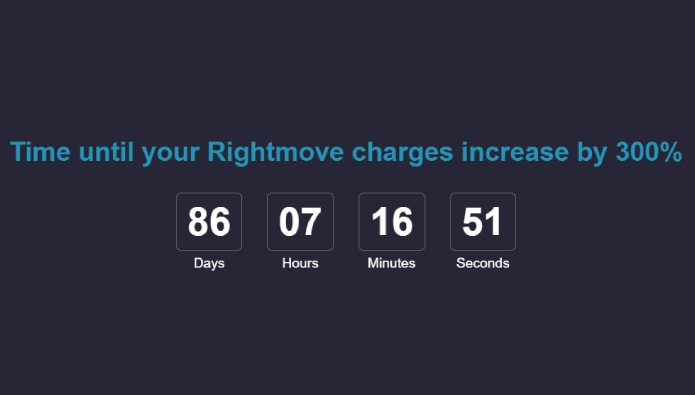 “And we continue to see resignations on a continuing basis. Many of them copy us in on their resignation letters” he adds.

Say No To Rightmove - a campaign that now has seven staff working on it, almost full time - has so far majored on securing the backing of small agencies with much less bargaining leverage than larger groups and the big corporates.

But Sargent says he has also spoken with several mid-size companies - much larger than one- or two-office agencies but below the size of the big three Countrywide, LSL and Connells - and says few have major disagreements with his assessment of Rightmove.

He anticipates that while membership of the campaign is continuing to grow on a daily basis, agents will inevitably begin to devote more time to their businesses once lockdown restrictions are eased and the sales and lettings markets resume.

However, he feels this may also trigger a new wave of support for his efforts to make Rightmove concede on fees.

“Once agencies begin to un-furlough staff they’ll suddenly see a spike in their costs and will look at their expenditure” he says, making it clear that portal fees - which for his Acorn company add up to almost £500,000 a year - would be a likely area to seek reductions.

Sargent has made clear repeatedly that his objective is not a one-size-fits-all solution, and that different agents may want different outcomes - whether that would be to leave Rightmove completely or see the portal move to permanently lower charges.

“But what is common with most agents is they want to see what happens next - and that’s up to Rightmove” says Sargent.

He insists that the portal can save itself if it responds favourably to the campaign he leads, and to those of other agents’ groups currently mobilising on Facebook.

“Rightmove will have to work very, very hard to win hearts and minds. That would have a big effect. But being charged £1,500 to £2,000 a month and then not being spoken to very nicely by Rightmove reps - well, agents aren’t going to put up with that.”

He pledges that if the response from the portal doesn’t involve what he calls “radical and positive change” then it will witness “the biggest exodus in its history.”

“Disaster for Rightmove is avoidable, by Rightmove itself” insists Sargent - but the clock is clearly ticking.

You can see the campaign on www.saynotorightmove.co.uk.

Rightmove was warned for years to improve relationship with agents ...

The leader of the Say No To Rightmove campaign has revealed...

Say No To Rightmove leader demands “no return to full tariff” ...

The leader of the Say No To Rightmove campaign says that...

Say No To Rightmove thanks Zoopla and OnTheMarket for ‘market freedom’ ...

The Say No To Rightmove campaign has taken the unusual step...