The Say No To Rightmove campaign has started buying social media advertising space in a bid to recruit agents.

In a ‘promoted’ tweet on Twitter, funnelled towards those who regularly view estate agency-related subjects, SNTR says:

“Our campaign relies on your support and we’ve got our sights on the next membership milestone of 3,000 agency offices!

“There are four very simple ways you can help the #SayNoToRightmove campaign today.

“Encourage at least three other agents to sign up to saynotorightmove.co.uk

“Connect with [campaign leader] Robert Sargent on Linkedin and join in the conversation! 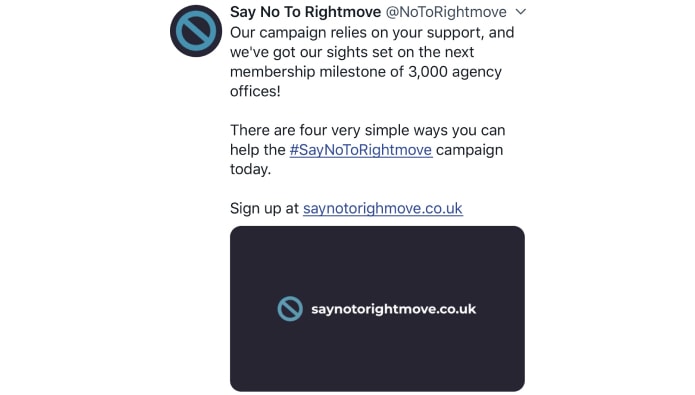 Earlier this week we reported that in an interview with Jefferies investment bank, SNTR leader Rob Sargent - head of the Acorn group of agencies - revealed that the campaign had some 1,450 owners on board representing 2,700 branches.

Following a cash injection from Acorn itself, the campaign has seven staff on board - four of them handling PR such as the Twitter material - plus another joining shortly.

Meanwhile a lettings agent has reportedly launched a petition calling on the government not to give funds to Rightmove, which earlier this month revealed it was eligible for substantial taxpayer assistance via the Treasury’s Covid Corporate Financing Facility.

The Negotiator reports that Kathleen McCallum, who runs Ayrshire Lettings and Sales based in West Kilbride, says: “Rightmove have overcharged small businesses for two decades … This company should be able to support itself based on what it makes, and agents no longer want it to exist because of its stranglehold on the industry … the government should do what Rightmove did to small business and say NO to helping them.”

Estate Agent Today reported Rightmove’s latest trading statement - in which its potential use of the CCFF was revealed - in this story here.

Rightmove in crisis: “No clear downside” to quitting, agents told ...

A new analysis of the simmering Rightmove crisis says there is now “no...