Rightmove has seen one of the best returns on investment of any company in the FTSE indices according to an investment and online trading company.

IG has analysed quoted companies and has drawn up a league table based on a notional investment of £1,000 made in the year 2010.

What would that be worth now? Of all the quoted companies, Rightmove is the fourth highest. £1,000 invested 10 years ago would give you £16,587 now.

Rightmove was founded in 2000 as a joint venture between four of the UK’s biggest agencies, who sold their stakes relatively early on.

Rightmove floated on the London Stock Exchange on March 15 2006 and since then has seen a broadly-uninterrupted share price rise. 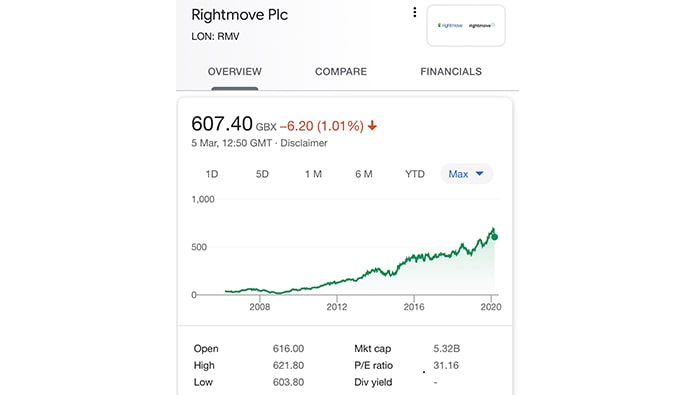 Separately the UBS bank is no longer advising investor clients to sell Rightmove; instead, in a note to investors yesterday, the bank says the portal “could perform well during the current period of macro uncertainty”.

Yesterday we carried an analysis by Mike DelPrete, an international analyst of agencies and portals, suggesting that in his opinion Rightmove was unbeatable in the current PropTech landscape, with no challenger likely to dislodge it from its number one position.

Countrywide “may not survive” warns one of its biggest investors ...

An investment manager who has a 7.8 per cent stake in...

Countrywide’s share price, which just over three years ago was riding...

OnTheMarket fails to impress with latest bid to win over agents ...