Estate Agent Today can reveal that one of the most senior figures in Countrywide’s upmarket John D Wood and Hampton International brands has quit the company.

Jonny Dyson was regional director of the central London region of John D Wood from June 2016 until late last year, reporting directly to the Countrywide board.

Prior to joining JDW, Dyson had been an area director at Hamptons International for over four years with responsibility for south west London; he created a branch which was the only Hamptons office to have made a profit in year one, he says in his LinkedIn profile.

Before entering the Countrywide empire, Dyson worked at Jackson-Stops & Staff (as it then was) and a number of London agencies including five years as a lettings negotiator and then senior sales negotiator at Foxtons.

There was speculation that there had been in-fighting at the higher levels of John D Wood towards the end of 2019.

Countrywide was asked for its comment on the departure and yesterday afternoon the company gave a statement attributed to Polly Ogden Duffy, managing director at John D Wood & Co: “Jonny has been with us in his role as regional director since 2016 following his time with Hamptons Northcote Road. He played an important part in the merger of John D Wood & Co. and Faron Sutaria brands and made a significant contribution to the business. We wish him every success for the future.”

Below you can see an email sent to JDW staff to announce the news. 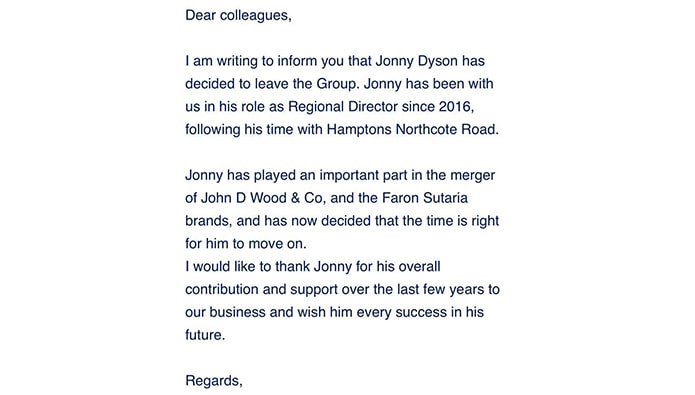