Hello and welcome to this week’s ADC - a sure sign that it’s the end of the week and time to celebrate our colleagues working hard for good causes.

You know the score by now: if you’re doing a charity event, please let us know on press@estateagenttoday.co.uk and we will help publicise your efforts.

There’s a distinctly athletic feel to this week’s activities, so trainers on and away we go…

The Suzy Lamplugh Trust: This is the UK’s pioneering personal safety charity and leading authority on stalking, founded by Diana and Paul Lamplugh following the disappearance of their 25-year-old estate agent daughter Suzy in 1986.

Over the next 12 months it wants to run an education programme on personal safety and stalking awareness, and continue to campaign and lobby the government to ensure everyone’s personal safety is better protected.

It has teams in the Hackney Half Marathon on May 17 and ASICS London 10km on July 5 - and it wants volunteers to run and fund-raise.

“By choosing to fundraise for Suzy Lamplugh Trust, you join us as we stand side by side with stalking victims, individuals, organisations and policy makers to make a difference in the lives of everyone” it says.

Make A Wish: A husband and wife duo, who work together in the auctions industry, are celebrating helping to raise more than £100,000 for good causes.

Andrew Parker is managing director of SDL Auctions and a fellow of the National Association of Valuers and Auctioneers while Rachel Parker also works for the leading property auctions network as a regional property manager. 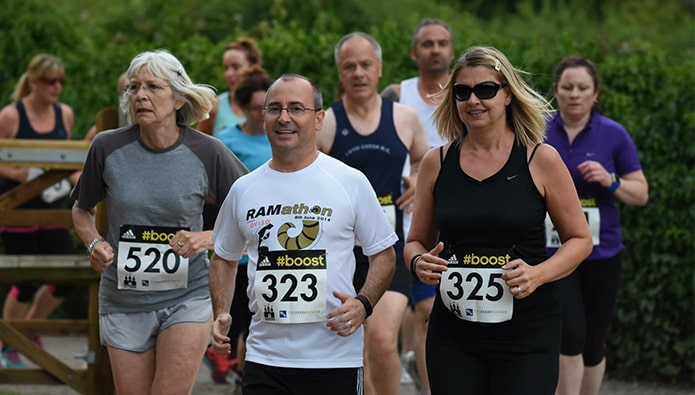 However, to mark the fundraising milestone, they won’t be having a celebratory party or popping a bottle of fizz – instead they will be pulling on their trainers to run the London Marathon.

Over the past few years, Andrew and Rachel have worked together, as well as alongside their SDL Auctions colleagues, to raise more than £100k for charities across the UK. This includes hosting charity auctions for The Donna Louise Children’s Hospice and child sexual exploitation charity Safe & Sound, as well as helping to arrange numerous fundraising auction balls.

Andrew and Rachel will be running on Sunday April 26 to raise money for Make a Wish, a charity that supports children with critical illnesses, and an organisation that the couple have volunteered with for the last 10-years.

Andrew and Rachel have set up their own JustGiving page for their London Marathon challenge, which can be found here.

So far, Farrell Heyworth has donated £8,883 and is t-shirt sponsor for the Moonlight and Memories walk and stall holders at the Yellow Ribbon Garden Fete. 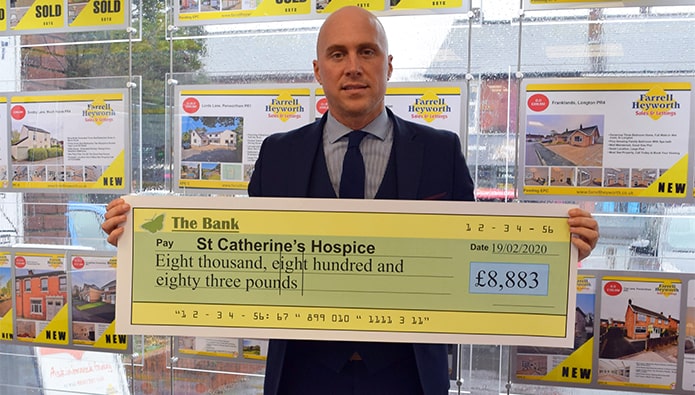 Farrell Heyworth director Jeremy Collins says: “The invaluable service provided by the team at St Catherine’s supports thousands of people in the communities we serve and we are proud to have had the opportunity to sponsor them this year. We very much look forward to taking part in upcoming events at St Catherine’s.”

The Prince’s Trust: RICS is working with The Prince's Trust to support more young people into the surveying industry.

Over 380 schemes across nine award categories have been shortlisted ranging from estate regeneration to delivering affordable housing, and an expert panel of judges will review entries before the grand finale in September.

RICS is also announcing, through the awards, their support for The Prince’s Trust to further boost skills and uptake into the property industry.

Adrian Ringrose, chair of The Built Environment, Infrastructure and Real Estate Leadership Group at The Prince’s Trust, says: “We are delighted that RICS has chosen to support The Prince’s Trust through the Social Impact Awards. With the recent Futures at Stake 2020 report suggesting a skills shortage, young people are best placed to fill roles and help avert a skills crisis.

“The Prince’s Trust is committed to engaging and supporting 10,000 young people over the next three years across the Built Environment, Infrastructure and Real Estate sector. Thank you to RICS for their incredible generosity and for supporting the next generation into this sector.”

The awards are divided into nine categories to include the best examples of development in the commercial, education, healthcare, heritage, infrastructure, land & rural, leisure, residential and student accommodation sectors – with an overall winner also due to be announced.

Each shortlisted project will be put to the vote by regional panels of RICS members - qualified professionals who work in the development sector, over the coming weeks. A final list of schemes will then go to the national grand finale.