I remember so clearly in my Foxtons days, working as a lettings manager in Putney, that lettings, though less sexy than sales, was instrumental to the success of the business model.

It was almost a mantra. Support and build lettings because in difficult times, lettings provides a lifeline. It is consistent recurring revenue but it also acts like a bit of a see-saw. If sales volumes usually dip, lettings volumes generally rise.

I might say the same in these difficult times, at least in the private rental space. It seems corporate rentals and overseas relocation is having a somewhat more difficult time given reports on Countrywide and Foxtons just recently in Letting Agent Today.

These are exceptions, though, not the rule for most agencies and hence why I wanted to discuss this today. Most agents here will deal with private renters, those that are likely hurting at the moment but also those that are likely to dream of being your future clients when it comes to actually buying a home.

Help them now and they will likely help you in the future (as well as paying their rent on time and with no fuss causing you less stress and hassle in already tricky times!)

Let’s get into the detail...

The past few columns I have talked about issues around ‘Transparency’ and ‘Certainty’ being drivers of the market around the world. As venture capital invests in infrastructure, the industry is really driving the emotional trend of those two terms.

Firstly, Transparency. I used this particularly recent argument of conveyancing to discuss it largely. “Don’t blame us, we are not the problem, you are” was the article last month. Before that it was my balanced perspective on the iBuyer market.

This is somewhat different...

There is a global concern about whether rentals will actually drive the next housing crisis as was reported in the Wall Street Journal just last week.

“A study of unemployed workers released last week by the Federal Reserve Bank of Philadelphia calculated outstanding rent debt would reach $7.2 billion before the close of 2020. Moody’s Analytics estimates that it could reach nearly $70 billion by year-end if there is no additional stimulus spending. The economic-research firm calculated that 12.8 million Americans would then owe an average of $5,400 from missed payments.”

So, how can we help? 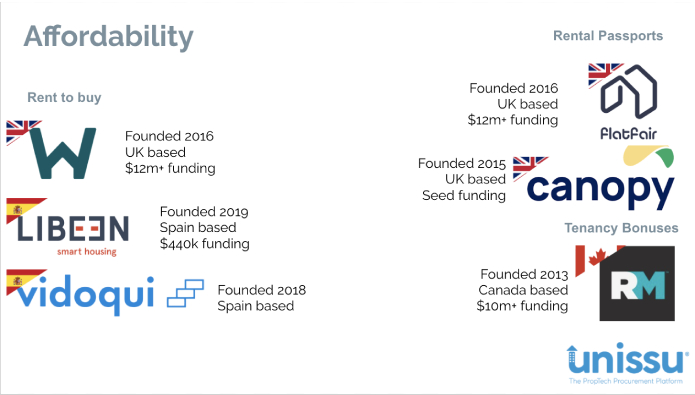 This above slide shows my starting point in speeches for the explanation of where we can support the entire market - tenants and landlords. Let me start on the right-hand side and then move to the more goal orientated left-hand side.

I have long been a supporter of deposit-free renting. The traditional month-long or six-week deposit is a legacy in my view and bad for both sides - even despite the cap now set at five weeks. As a landlord, if someone does a lot of damage, six weeks doesn’t come close (as I have learned only too well) and as a tenant, the significant possibility is that the money is tied up causing a friction when it comes to thinking of moving.

The likelihood of having to stump up another six weeks’ rent to move to another property is extremely high and therefore preventative.

Deposit insurances, in my experience, are much cleaner, quicker to handle and also cheaper for the tenants in terms of cashflow. Yes, they may have to pay for an insurance policy but if it frees up cash, I have so far not had an issue.

As a landlord, if I was offered an insurance-backed deposit over a six-week deposit, I wouldn’t hesitate. As a tenant, I would also be far happier to pay a little money than the likelihood of having a large sum of money held where it wasn’t accessible.

Companies like Flatfair, Zero Deposit, Canopy and many others that you can find in this search are relevant.

You will note above that there is a Canadian company mentioned. I was presenting to a Canadian audience on this occasion but consider a company like Vaboo here as the UK equivalent.

I met Jonathan way way back at the start of the Vaboo journey and always liked the sound of the model - built from his own experience as a landlord of quite a few properties. How can I incentivise my tenants to pay their rent on time was the original idea and business plan.

Give them incentives and discounts off of other, useful household items or treats was the answer. A win-win. You help me, I help you.

He turned it into a business with Vaboo, and offered those incentives out to build the collective pool of tenants and thus helping him drive better deals for everyone. The power of the crowd.  Now up to 100,000 tenants are engaging weekly so certainly a step-up from where it all started.

I also note with interest their strategic partnership with Flatfair announced just recently (included above in the alternative deposits) which seems a sensible move. Jonathan stated the following: “Help us both to improve the image of the PRS and make the renting experience more rewarding.”

It never occurred to me the challenges presented on this topic. The fact that rental payments made by tenants didn’t count towards any form of credit history. It all came to a head when I was very fortunately flown to Argentina by a global bank a few years back (as you do!).

They wanted us to work with their teams on finding ways to help their mortgage teams drive business using technology. For them, they recognised that their client type was changing.

Mortgage agreements were being agreed with a changing demographic. Globally, people were getting older as generation rent became a thing.

Obviously, this wasn’t good for the bank and they needed ways of using technology to help them. They needed to increase their mortgage applications from a younger audience. But how?

We presented them an overview of the technology market and what was happening. The trends we were seeing. What interested them, amongst a few other things, was this idea of using rent payments as a way of providing better credit scores for individuals. This in turn could be used to support bank customers in mortgage eligibility.

Companies like CreditLadder and Canopy were discussed with this in mind as good examples from the UK. Tenants could pay through the company to ensure their rental payments were included as part of their credit history as currently this just wasn’t happening.

In doing so, it created a ‘rental passport’ of not only the tenant’s reliability for other potential landlords but also created this digital footprint when it came to looking for a mortgage.

It seemed this rather simple approach wasn’t being considered anywhere in the world at this time...

Another interesting concept is closer to the model of true ‘ownership’ and, despite a few rocky moments over the years, companies like Wayhome are good examples of this type of model. Arguably, the UK is leading the way somewhat here but copy cats are starting to appear elsewhere too.

If you have a 5% deposit, buy that amount of equity and then have 95% funded by pension schemes. Previously the latter have not really had huge access to residential portfolios so it works for them and it then works for the tenant as the subsequent payments, whilst deemed ‘rent’ are actually paying off more equity in the property.

Essentially, it is a shared ownership scheme as there are limitations to the amount of equity that you can ‘own’ in the property but it is a way of people genuinely renting to buy.

I won’t go into the details here of companies like Wayhome but I do think they are a supportive model which tick a lot of boxes. Do check them out.

To conclude on this column for this week, affordability is a complex issue and means different things to different people. In this case, I see two forms. Firstly, general affordability and given current or potential tenants easier, more fluid or cheaper ways to rent a home or to move from one to another.

The second version of affordability here is given an access route to generation route to home ownership and an element of security - another area I talk about a lot in speeches I deliver. If tenants feel an aspect of ownership as well as security, I might suggest it will make them better tenants.

Ultimately, from an agency perspective, if you make their lives better, they will hopefully help you through turbulent times.

At the end of the day, agency is moving more and more to a service business model and not one that is transactional. Look after your customers and they may start to look after you...

A story from America caught my eye this week. It’s about...

PropTech Today: Are consumers abandoned by online and hybrid agents? ...

Not so long ago, the best estate agents were those who...