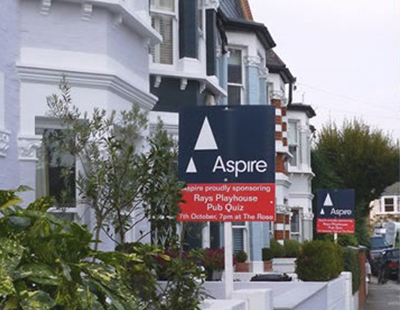 Aspire, the six-branch south west London agency, has dropped its previous franchise structure and reverted to being owned outright by its joint directors.

Aspire operated as a franchise since its creation in 2003, and now has branches in Balham, Battersea, Clapham, Fulham Central, Fulham South and Furzedown/Tooting. As part of its franchise structure it incorporated the Hugh Henry company, one of the original franchise holders, which was established as far back as 1880.

The six branches and Aspire's development and new homes department, as well as its property management division, will be part of the new structure solely owned and managed by directors Matthew Dabell and Tom Ward.

“When I co-founded Aspire in 2003, together with Andrew Townend, I wanted to better the all-round property experience for both staff and home movers” says Dabell. “Over the years we have grown and increased our market share but at all times, our mantra has been to be a customer-focused, less bureaucratic, agency. Our network remains united as one but by taking full control together with Tom, we can progress our future plans with clarity, while revisiting the pledges I made when I started the agency.”

And Ward himself adds: “The move to bring all our offices and our lettings division together will help our agency build on its current success and founding principles. As a dual agency with a large, fully managed property portfolio, we are strong in all market conditions. Our ambition remains to be a local agent for local people, staffed by local professionals – values we share as joint Directors.”

The branches - which have 40 staff members - will remain open “with the existing teams loyally remaining with the company and providing continuity of care” says a statement from the firm.

The NEXA agency, which already has branches in Bristol, Portsmouth, Chichester,...

Agency to move from High Street to ‘digital first’ operation ...

An agency which in 2020 moved from traditional branches to a...