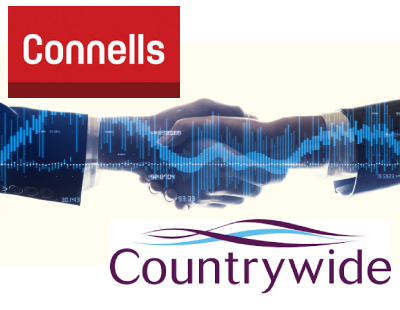 It’s been announced this morning that Connells is in takeover discussions with the troubled Countrywide agency group.

Countrywide has given Connells until 5pm on December 7 to confirm or deny that a firm and final offer will be made.

A statement from Countrywide says: “Countrywide plc has received an indicative approach from Connells Limited to acquire the entire issued and to be issued share capital of the Company, in cash, at a price of 250 pence per Countrywide share. The Approach is at an early stage and Connells Limited has indicated that any offer is conditional upon, amongst other things, completion of confirmatory due diligence and the recommendation of the Board of Countrywide.”

Countrywide has also scrapped a proposed special general meeting to consider a rival move made by a private equity firm - Alchemy - initially revealed on October 22.

This morning's statement to shareholders continues: ”Accordingly, Countrywide shareholders should take no further action in connection with the Proposed Transaction (including the making of payments of application monies, and the submission of application forms, documents of title, proxy forms and voting instructions) until further notice.

“In the meantime, the Board will continue to engage with its shareholders to examine all potential options to deliver a sustainable capital structure for the Company and to maximise shareholder value."

Last month Countrywide group announced a £90m investment by Alchemy Partners, a private equity company that specialises in investing in distressed and undervalued or underperforming businesses. But one of Countrywide’s largest existing shareholders, Catalist Partners, opposed the move.

A special virtual general meeting had been arranged for November 18 to debate the move - that's now been scrapped as the Alchemy and Catalist proposals have been overtaken by Connells.

While this was going on, Countrywide has also been 'under the radar' closing substantial numbers of branches across a range of its brands, typically without any announcement. You can see our latest story on this here.