Two companies that persuaded property investors to pay as much as £25,000 for a parking... 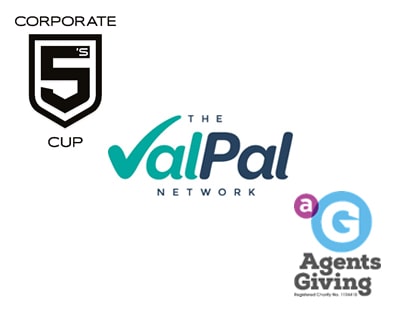 It’s back - the five-a-side football tournament which made its debut last year with teams from the property sector makes a welcome return in 2020.

This time it’s called The ValPal Network Cup, powered by Corporate 5’s, and teams from the property industry are invited to take to the field.

Corporate 5’s hosts a unique and exciting series of five-a-side football tournaments, providing businesses with the opportunity to compete against and network with their industry rivals - and all while raising money for good causes.

Last year’s property tournament was contested by 16 teams, with online marketing firm Digital Munkey crowned champions - although there were strong showings from the likes of Estate Agent Today [who are they? - Ed] Drivers & Norris, FocalAgent, Hamptons International, OneDome, Deverell Smith and Ludlow Thompson.

The 2020 edition promises to be bigger and better than ever. There will be a series of individual industry tournaments taking place at the state-of-the-art Trent Park Football, London’s premier football centre, culminating in a grand final and one business being crowned Corporate Champions 2020.

The industry tournaments will cover a range of sectors and each tournament will take on a World Cup format with group stages followed by a knockout cup and shield, providing each team with at least four games.

The two finalists from each tournament qualify for the grand final and the overall winners will receive a fantastic prize.

The ValPal Network Cup will be taking place on Friday April 3.

In addition to the tournament, Corporate 5’s provides refreshments and branded kit for all teams. There are also a range of fun challenges and activities to create an engaging atmosphere on the day and to keep teams entertained between matches.

Following the tournament, there will be a football quiz for all participants, providing the opportunity to win some great prizes and network with other industry professionals.

Previous tournaments have attracted the likes of Chelsea FC, The NFL, LadBible, Joe Media, Puma, The Mirror, ESPN and Red Bull, and the feedback from these organisations has been fantastic.

The tournaments aim to not only allow businesses to network and connect with other organisations in their industry, but also encourage using the power of sport to build bonds within a team.

The ValPal Network Cup will also provide businesses with the opportunity to raise money for good causes with 10 per cent from every entry fee donated to industry charity Agents Giving.

“The main reasons that organisations have given for getting involved is to reward their staff or to use the event as a team building opportunity. They’ve also found that the tournaments provide a unique networking opportunity in a fun and relaxed environment and most importantly they love the opportunity to get one over their competitors on the football pitch” explains Duncan Scott, director at Corporate 5’s Cup.

And Nat Daniels - chief executive of Angels Media, which publishes Estate Agent Today, Letting Agent Today and the other industry ‘Today’ titles - adds: “We had the pleasure of taking part in last year’s property tournament. The standard of football was high and all the games were played in a competitive but friendly spirit. This culminated in a fantastic day out for agents and suppliers who got to reward staff with the opportunity to play the beautiful game with their colleagues.”

Nat will be donning the goalkeeper gloves for the EAT team once again - or as he puts it himself, “Hoping to bring out my inner De Gea!”

Craig Vile, director of The ValPal Network, comments: “We’re delighted to be partnering with Corporate 5’s for The ValPal Network Cup this year. We look forward to welcoming property professionals on the day and seeing which company comes out on top and becomes this year’s industry football champions.”

Readers of Estate Agent Today and Letting Agent Today are being given the opportunity to win a FREE space in The ValPal Network Cup, powered by Corporate 5’s. All you have to do is enter your details here and then a lucky winner will be chosen at random.

One of the founders of Purplebricks is on course to create...

One of the brothers behind Purplebricks has bought a football stadium...