I remember the day well; the day we all fell foul of addiction, the day our website was launched.

Until then, at Foxtons, the leads would come into our high street branch directly off the street.

As negotiators, we would see them coming and (quite literally) fight each other to reach the front office.

Whoever got there first was the winner - there could only ever be one. Everyone else, between five and 10 despondent twenty-somethings, had to glumly shuffle back to their desks.

The winner walks out to the front office, calmness personified, and registers the applicant, knowing full well that they could be leading you to a very nice payday next month.

It was simple. Cut-throat but simple. And then it all changed.

Front office leads dried up. Previously, when it came to around 3pm, we would all be doing our paperwork and chasing deals and the valuer would walk up to each of us with a printout containing the web leads.

These were leads from the day before which had just been printed out. We would nonchalantly take them, stuff them somewhere among our other pages and files and more-or-less forget about them.

There was no chasing from the managers at that point, it was just a lead from the website. Our Foxtons website.

Fast-forward a few months and I was, somehow, managing an office of my own. I remember it like it was yesterday: for one reason or another, we started to take these website leads a lot more seriously.

The first part of this was dealing with them almost immediately, rather than waiting 24 hours.

Pretty soon, those races to the door were happening less often, the phone didn’t ring quite so much.

Suddenly, the silent sign language we had created in the office, often to communicate some competitive banter, was unnecessary because there nobody was on the phone to a client.

It was the beginning of the end for the personal lead.

Around the time I left Foxtons, Rightmove was really starting to kick in. Applicants (lets revert to customers to bring it to the modern day) weren’t even picking us as a brand to work with.

Why would they? They suddenly had all, or most, of the available properties right there at their fingertips. They didn’t need our brand, our office, our phone number nearly as much as before.

I remember thinking that we had lost control of our market.

We had lost the buyers. We only had control of the sellers. The portals now ruled our world.

This was over 15 years ago and yet, today, we are still amazed we are in this position. The same position.

It turns out that our own-brand website was a gateway drug which has led us to the harder and harder drugs on which we are all now dependant. Portals are our heroine. We can’t see ourselves giving up. We are addicted. We have no choice. It is a long, slow death to disintermediation. I’m serious.

But, but, don’t worry, you are not alone, dear agent. These early PropTech companies are not just impacting your world but also the world of others far further afield. 10,500 miles further afield, to be exact.

I am typing this on my way back from Sydney after moderating a conference over there. I am en route to Singapore where I will do the same thing all over again.

What was interesting in Sydney was the presence of REA and supposed presence of Domain Group. Alas, the latter didn’t turn up and therefore let me digress a bit.

Moderating a conference isn’t easy. You have to be ‘on’ all the time. Keynotes are great. You generally know your material, deliver it and get off.

Moderating means you have to know your speakers, know your audience and make them tick. Bring the whole conference together so everyone is happy and together.

The key metric is how many people stick around to the talks and panels at the end of the day. A tricky one I tell you.

However, this was Australia and England had just won the third Ashes test: this was going to be easy.

Indeed, the first day was good. The audience were good-natured and obviously gave it right back. The second day was different. You need to vary it a bit. Overnight the cricket debacle in the fourth test was only second to the Boris debacle in Parliament.

Therefore, the next day led to me introducing every speaker with descriptions of how Boris had discussed other world leaders. I enjoyed this very much.

The opening speaker on day two, a very respected leader of tech for JLL, was therefore announced as a ‘sadistic nurse’ after Boris’ odd handling of Hilary Clinton. Fortunately, Carolyn took it rather better than Hilary Clinton and proceeded to give a great opener.

I mentioned Domain Group didn’t turn up, giving us only five minutes’ notice. Perfect, I thought. My favourite Boris poem got an outing: “There once was a person from Ankara who was a bit of a w*nkarer”, is how it starts…

REA group, Australia’s leading portal, was there. Both its chief economist and its chief inventor (what a great title - why haven’t any of our portals got that title?). First thing to mention is just how good they were. Really good speakers, very switched on and intelligent people.

This is despite various people whispering to me about just how much everyone over here hates REA group.

I am going to focus on Nerida, their incredibly well-spoken economist. Using the bottom two slides here as a reference - mainly pulled from an analyst from the States called Mike Delprete, if you are interested.

I am going to explain why everyone was whispering in my ears. This also relates to the UK for any of the portals we all know.

First, it was the profitability of the platforms themselves as a % of revenue taken from agents. REA second only to Rightmove. Zoopla, the lowest of them at c.28%. 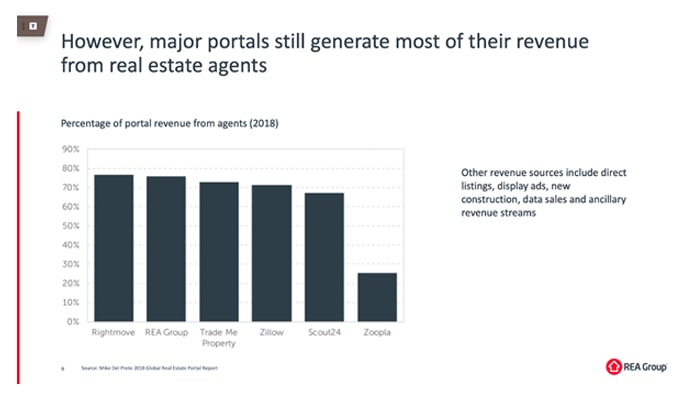 This then led to this next slide which shows how close these same portals are getting to the actual transaction. REA is obviously pleased it is able to point out that it’s nowhere near. As is Rightmove incidentally. 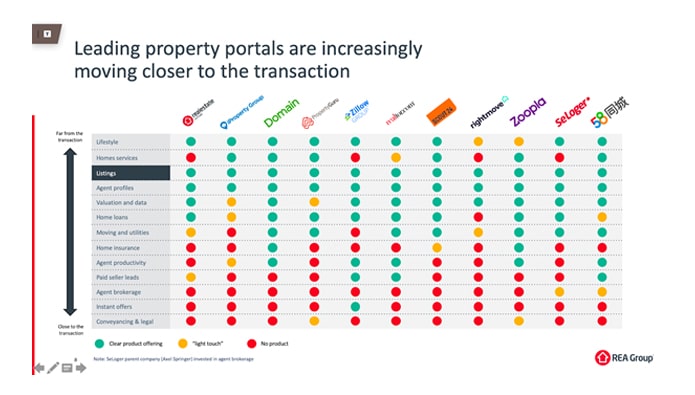 Zillow was honed in on given its instant offers product. Considering its overwhelming reliance on agent revenue, I still think this is a crazy idea. But then there is Zoopla, slowly releasing products all the way along.

This is where I find portals quite frustrating. They are treading a precarious tightrope.

REA is pleased to have no interest in building products any closer to the transaction. It almost seems proud of the fact.

But, here’s the thing. Rightmove is in the same boat and it is only concentrating on supporting the agents with leads. But, it is charging more for the privilege.

This is what is most likely going to happen with REA as well. Agents need it and will not leave I suspect. Price rises are therefore inevitable.

This is where it all goes wrong. Portals are damned if they develop products for the ultimate end customer and yet they are also damned for not satisfying the needs of their immediate customer.

Irrespective of lead generation, there are obviously global trends for portals to get closer to the transaction. Take examples like 99.co from Singapore, Fang.com from China and zameen.com from Pakistan. All examples where they are doing this actively. Why? Because they have more trust than local agent brands.

If incumbents don’t look at changing, this will be a long, slow decline for the excellent business models. As I mentioned in my piece after REA spoke, it suffers the innovator's dilemma. It is not going to be a pretty few years. It is going to p*ss a whole load of people off but it has to decide what it is going to do if it is still going to be relevant in five years’ time.

It is not going to be pretty.

Portals becoming less effective is akin to your dealer slowly running out of crack to keep you high. Everyone needs to come up with an alternative solution to the problem.

In the meantime, there is also another issue that I want to quickly raise about portal leads. We still get so many we are having to build solutions that can help us manage them.

In Australia, they have a similar problem because, I hear on the grapevine, around 40% of leads are never even responded to. It can’t be far off that here in the UK - I know there is a figure out there - please someone post it in the comments if they know it.

In my day, I used to fight for every single applicant I could possibly get. What has happened to create this new normal where we can’t even speak to all enquiries?

It seriously annoys me when I hear this sort of thing. We almost don’t deserve to have portals supplying us with these incredible leads.

By the way, there is no magic solution here. No PropTech should get in the way at this point. It is simple. Contact them in whatever way you can.

If you don’t bother contacting them, I hope the portals do disrupt you. You will deserve it.

PropTech Today: Is Zoopla about to make a push for agents’ jobs? ...

Not in vain the distance beacons. Forward, forward let us range, Let...