One of the first so-called ‘hub’ hybrid estate agencies using self-employed freelances instead of staff says it’s moving to bigger premises because it has so many new recruits - including some from rival hub-based operators.

Agent & Homes launched 15 months ago and operates across 24 postcode areas of London, covering both sales and lettings. In its words, it “aims to fill a gap in the market between costlier high street operations and low fee online agents.”

It hires freelances who operate from a central hub, but now say it is moving to larger premises because of the number of agents on board.

The new recruits include staffers from some traditional high-end agencies including Savills, Sotheby’s, John D Wood and Foxtons. But others come from rival firms that operate hubs for freelance agents, such as Keller Williams, Harding & Green, The London Broker and Purplebricks.

The new hub will be close to the old one, in London’s Notting Hill Gate.

"Agents come and go as they please from our hub. Some prefer to work from home or 'on the go' utilising our cloud-based software. However, when the guys do pop in, they treat the hub as their own office or space, which is exactly as it should be” explains co-founder Bob Crowley (pictured left), who previously worked at Marsh & Parsons and John D Wood as well as at innovative PropTech firm Nested. 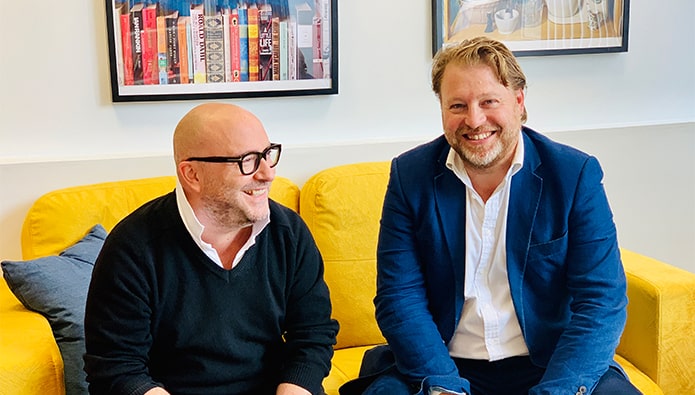 “We also acknowledge they also have to have professional surroundings however when clients pop in, hence we have created separate offices designed specifically for private meetings as well as lounge areas where clients can pop in for a coffee and a chat. We’ve catered for every need” adds the other co-founder, Rollo Miles (right) - he’s ex-a former manager at Marsh & Parsons and John D Wood.

Agent & Homes says it is now looking for additional freelance agents who, according to Miles, “have had enough of sitting in a dead high street office for 10 hours a day, being made to call the same applicants every day.”

The firm admits it has turned down some applicants with reputations for poor behaviour, but Miles says of its new recruitment campaign: “We are targeting respected agents who are tired of having an overbearing manager or area director setting ridiculous targets or being force-fed spreadsheets to complete in order to satisfy a bean counter at head office. Agents who want to enjoy flexibility and not have to work six or seven days a week. Agents that want to see their families during the week and at the weekend.”