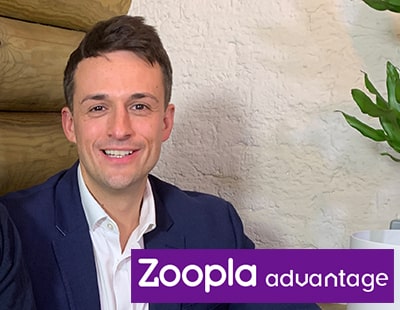 Former Purplebricks chief executive Lee Wainwright says the problem for estate agents maintaining a strong level of fees isn’t competition from under-cutting online companies - instead it’s the need to prove their own value to consumers.

In a video for Zoopla Advantage, Wainwright - who had 25 years working at Countrywide before joining Purplebricks - says High Street agents who have reduced their fees from a typical 1.5 per cent on average to around 1.2 per cent have effectively taken £750m out of the industry per year based on current transaction levels.

“Online isn’t the problem here. It’s that ability to prove value of estate agency to protect our fees and get paid what we’re worth” says Wainwright.

His comments come in one of a series of videos commissioned by the portal to give its customers what it calls “the advantage.”

The series is hosted by Chris Buckler (pictured above), who has been in the industry for over a decade as an agent and who now leads the London Bridge office of Keller Williams.

Topics include kickstarting an agency’s digital strategy, demonstrating an agent’s value to consumers, how to nurture leads, getting the most out of marketing, gaining listings thought social media and what makes a ‘good’ agent.

“Agents are typically extremely good but there’s always an opportunity to learn from others, and that’s what this is all about. These will be bite-sized golden nuggets, that we have taken from some of the top talent in the country so that you can immediately implement some best practice wins in your business. It’s short, snappy, and you will get some excellent takeaways” Buckler has told Estate Agent Today.

His first batch of videos - each just three to five minutes long - include contributions from marketing coach Sam Ashdown, Ed Mead of PropTech outsourced viewing service Viewber, and Nat Daniels, chief executive of Angels Media and publisher of EAT and the other Today publications.

Buckler continues: “As an agent who has been in the industry since my 20s, I’ve had my fair share of lessons learned – as have many of my peers. Over the course of this series, I’ll be working with Zoopla and a cohort of fellow agents and property professionals to cover some of our tips on how to stay at the top of your game in our incredibly dynamic industry.”

Zoopla says it wants ideas from member agents as to new videos for Zoopla Advantage, which it describes as its “agent hub for property insights, industry research and news.”

You can see the first video in the series below and the rest of the videos - including Lee Wainwright’s three tips for agents convincing staff and consumers of their value - here.

Poll: Do you agree: could agents do more to prove their value to customers?

Rightmove no worse than many other suppliers says ex-Purplebricks boss ...

One of Britain’s most experienced estate agents says there’s no alternative...

Hundreds of agents sign up to free virtual viewings service ...

Zoopla says over 250 agents have now signed up to its...

Purplebricks: so what do Local Property Experts REALLY earn? ...

A statement made by Purplebricks in its trading statement yesterday appears...

The former chief executive of Purplebricks has defended claims that some...