Connells, which already has the explicit support of a majority of Countrywide shareholders for its...

A London council admits that it typically takes 50 working days for a search - which means a Local Land Charge submitted today would be answered around October 23.

Camden council’s planning department has for some time carried a message on its website saying: “Our current turnaround time is 50 working days, please call between 9am and 3pm if your search is urgent and you need to chase.”

The message gives no indication as to why this is the case, and has led to social media speculation about poor staff relations in the department triggering a walk-out. 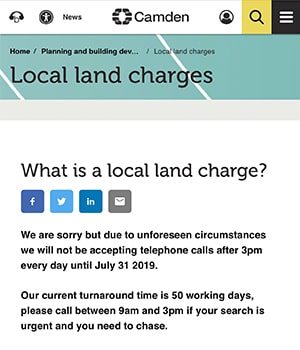 The situation as it affects transactions is now “at crisis point” according to one local agent who contacted Estate Agent Today.

The agent - who asked not to be named - said that this backlog was the case even though sales volumes in the borough are currently lower than average because of the depressed London market.

It is thought that at least some local agents are now advising individual vendors to apply for their own searches when they put their own home on the market, in a bid to avoid a delay later in the chain.

A council spokesperson told EAT yesterday: “We currently have a backlog of searches which has arisen as a result of a number of vacant staff positions. We have now appointed to these positions and are seeking to rectify this issue urgently.

“We will respond to all search requests as quickly as possible, but in the meantime we advise all search agents to contact the council if there are any outstanding searches that are urgent in order to prioritise these.”

Camden is not the only council with extremely long search delays.

Surrey Heath authority earlier this month warned that it could not provide any local searches for over six weeks, although it more recently downgraded its warning, saying there would be delays of an unspecified period but not a total shutdown.

What now for faster house sales as search roll out ‘could take seven years’? ...