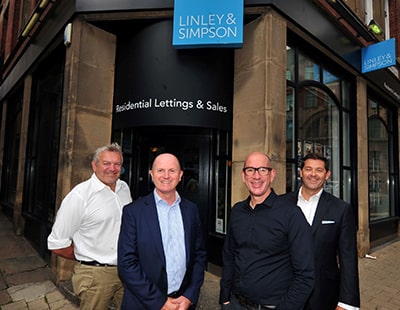 Two of the highest profile independent estate agencies in the north of England have merged following a spectacular acquisition.

The deal covers sales as well as rentals, but it marks the third acquisition that Linley & Simpson has completed since the letting fees ban came into force on June 1, which the agency says has added impetus to continuing consolidation of the agency industry.

Linley & Simpson has also revealed that two further acquisitions are at an advanced stage.

The deal adds more than 1,450 homes to the lettings portfolio of the agency – founded by Will Linley (pictured centre left) and Nick Simpson (far right) - which now stands at 8,000 properties across its 16 branches in North and West Yorkshire

It also brings together the land and new homes specialisms of both agencies, as well as their property consultancy services, as part of a strategy to support the pipeline of new-build across the city. 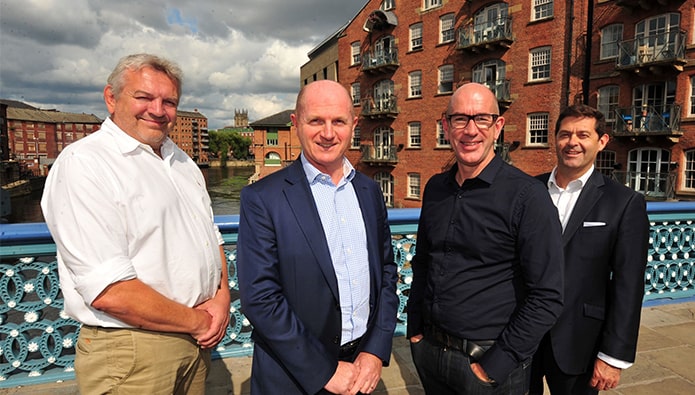 “This is a milestone moment for two like-minded, home-grown Yorkshire agencies who both launched in Leeds in 1997” says Will Linley, chief executive of Linley & Simpson.

“When we first opened our doors, there were only around 500 residents living in the city centre. Now there are over 12,000 and over the next decade we expect the population will grow to well over 20,000.

“As the cranes return to the Leeds skyline in ever-increasing numbers, this is a timely opportunity to bring together all our skillsets under one roof amidst this latest phase of Leeds’ urban revolution.

“The combination of Morgans’ city living expertise and our wider Yorkshire reach is a perfect fit for providing a market-leading service – one that meets the needs of buyers and sellers, landlords and tenants, as well as developers.”

While the deal signals the biggest acquisition in its history, Linley & Simpson says it is “actively pursuing other opportunities as part of an ambitious growth strategy.”

The acquisition – completed for an undisclosed sum – is the 8th to take place since Linley & Simpson secured the backing of private equity investor LDC in June 2018.

Gareth Marshall, investment director at LDC in Yorkshire & North East, says: “Linley & Simpson’s footprint in Yorkshire has expanded at an impressive rate in the last 12 months and we’re confident its position as a leading agent in the region will continue to grow. The UK’s estate agency and lettings market is competitive and an expanded offering to customers is an effective way to stand out from the crowd.”

A high-profile regional agency is “cracking on” with support for a hospice...

Your festive photos - and we've got quite a treat for you today... ...

Thanks so much, as ever, for all of the Christmas cheer...