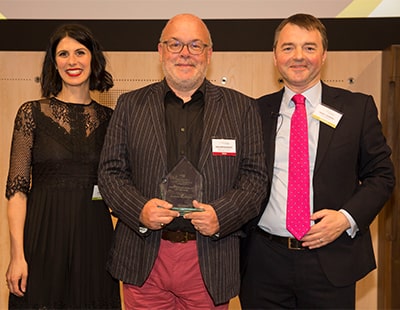 Estate Agent Today has been named Property Trade Magazine of the Year 2019 at the annual Property Press Awards.

It fought off competition from three other shortlisted titles including Property Industry Eye.

The judges remarked on its authoritative tone, the speed at which stories are reported, the mix with features twice a week, and the complementary use of social media by publisher Angels Media and editor Graham Norwood (pictured above centre).

Some 50 judges - mostly from the agency and public relations industries - preside over a total of 20 awards, which are the only ones of their kind for trade and consumer property writing.

The Times’ weekly Bricks & Mortar was named the Property Supplement of the Year and its editor Anne Ashworth won the Lifetime Achievement Award.

*The picture above is of Graham Norwood receiving the Property Commentator of the Year award at the Property Press Awards, organised by Property4Media.com, the social network connecting the property industry with the media.