For the industry's football lovers, the notable achievements and never-say-die attitude of both Liverpool and Tottenham Hotspur on the European stage this week won't have passed you by.

And here at Estate Agent Today, each week we hear about the little miracles carried out by agents and property professionals all over the country in the name of fundraising for good causes.

If you'd like us to share news of your latest project, all you need to do is contact us on press@estateagenttoday.co.uk and we'll do the rest.

On with this week's show...

Fine & Country Foundation: The team at Fine & Country Droitwich Spa have joined forces with Grafton Manor to host a fashion show for the third year running.

The event, which will support the Fine & Country Foundation, takes place on Saturday June 15 and will welcome up to 50 people for afternoon tea, a catwalk show and clothing sale.

It's being hosted at a stunning Elizabethan manor house in Bromsgrove, Worcestershire and all proceeds will support the homeless.

"My colleagues and I are overwhelmed by the support of people over the last two years that we have run the fashion show. Last year a guest donated a Louis Vuitton handbag which sold like lightning," says Vanessa Bradford, partner at Fine & Country Droitwich Spa.

Tickets for the event are selling fast at £25 apiece and Fine & Country are accepting donations for unwanted items to be sold at this year's fashion show.

Launched last year, the adventure garden at Martin House Hospice in Boston Spa was recently extended by the team ready for the summer, with a new 18-foot crocodile replica unveiled as the centrepiece.

2019 marks the third year in succession that volunteers from Linley & Simpson have helped transform the outdoor areas of the hospice, which is its chosen long-term charity partner. 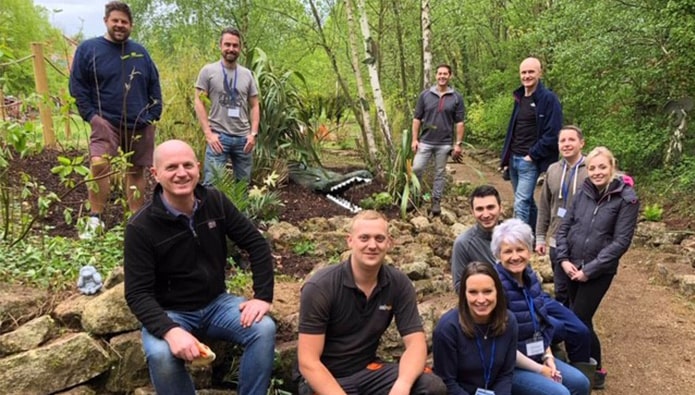 "So we jumped at the chance to have the opportunity to make it even bigger and better for the children and young people to enjoy."

"Since we began supporting our friends at Martin House, we have handed over £70,000 - but we also like to give our time through different volunteering projects like this," she adds.

Foodbanks across the UK: Relocation Agent Network (RAN) has announced the details of its summer fundraising event '#RANFoodbank10K'.

The national network of agents will be aiming to collect at least 10,000 items of food (and other necessities) for local foodbanks across the country.

The event will run between June 13 and June 20 and will see RAN agents and their customers make donations to help tackle food poverty in local communities.

This is the second year that RAN is hosting the event and it will coincide with Agents Giving's 'Donate a Food Parcel Day' on June 20.

Richard tucker, managing director of RAN, says: "We’re delighted that such a large number of our members plan to help us with this fundraising effort and we look forward to beating our target and seeing how many items we can collect during that week."
-

Henshaws: Our friends at Linley & Simpson are at it again, this time rolling out the barrels in support of a charity's inaugural beer festival.

The Yorkshire agency is among the sponsors backing the fundraiser being launched by Henshaws as part of its 21st anniversary celebrations.

Henshaws is a charity which helps people with sight loss and a range of other disabilities across Yorkshire and the North of England.

The event, which takes place this Saturday May 11, will welcome more than 1,000 visitors who can enjoy live music from local artists, a BBQ and a raft of other family activities.

Of course, there'll also be plenty of beer, including an exclusive Henshaws brew and pints from local breweries Cold Bath Brewing, Daleside, Harrogate Brewing and Roosters.

"Like Henshaws, we have been at the heart of the local community for more than two decades," says Emily Wilkinson, customer service manager at Linley & Simpson.

"We are delighted to be a partner of its first-ever beer festival as part of our growing programme of support for charities and good causes."

Let’s face it - summer seems to be on holiday itself,...

It’s hotting up out there as a beautiful summer’s weekend beckons...