I am writing this as I reflect on a recent trip to Nigeria. I was asked to speak at the country’s inaugural PropTech conference in Lagos.

It was scary, crazy and exciting all in one. Viewing a new market like that always gets you thinking.

Considering how a city like Lagos, with 21 million people, reaches the basic housing needs is mind boggling. Giving this, the entire country, complete with its 190 million citizens is something else entirely given the diverse mix of people, cultures, religions, and wealth.

When you consider the size of this market you get a sense for how interesting a journey the 46 PropTech companies I know of in Nigeria, will have. I suspect there will be many more in due course.

Anyway, while I rarely know what to expect when I disembark the plane, when I am up on the podium delivering a presentation, one thing I can be certain of is that the slide below, showing the do’s and don’ts of market disruption, will be, by far, the most photographed slide in my deck. My audience truly becomes a sea of smartphones rather than faces at this point. On my recent trip, this was no different.

Disruption, it seems, or at least the sense of threat that people get from it, has no geographical borders.

Given the popularity of this slide, regardless of the particular leaning or niche interest of any given audience, makes me think it will make good material for an ongoing series of articles for EAT.

What fascinates me most is thinking about why people are so inclined to snap a picture of this slide in particular.

In the countries and markets that are further behind the likes of the UK and USA, it is understandable - they are still working all of this out. But for the more developed markets, which are still where the majority of my presentations take place, the slide creates equal interest.

I think it’s partly because each of the don’ts are incredibly easy to find yourself doing without even realising it, despite having the best intentions from the start.

‘Don’t downplay’, is a good example. Many people, often rightly, think that it’s a good idea to keep a bit of distance, stand back and look at the technological disruption from afar in order to better assess its impacts and necessity.

In doing so, however, there is a risk that you will act to downplay the importance of market disruption to the point where you fall behind, or indeed make a bad decision which continues to have negative effects for years to come.

The popularity of this slide then, is, I believe, due to the fact that people recognise their own successes and shortcomings when they look at it and by snapping it for posterity, they have an easily digestible list against which to quickly check their own efforts to further understand and act in accordance to market disruption.

For the next month-or-so, I plan to take one do and one don’t and explain them in detail - using real world examples of companies who have found success and encountered difficulty as a result of successfully and unsuccessfully respecting these simple rules.

And, while this slide is meant for audiences of all kinds, I will endeavour to keep this series of articles loyal to the agency readership of EAT.

It is my hope that such a series will not only give some gentle theoretical guidance, but also show the good and bad of current best practices, helping appreciate how market disruption is something to be embraced rather than overcome.

I hope, too, that this series will encourage a little interaction from my dear readers, offering some insights or experiences you may have to either support or counter the points that I make throughout the articles.. 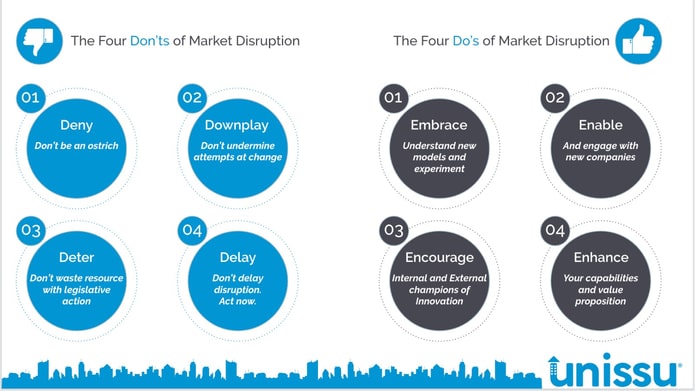 Let me start with one brief example of an initial 'don’t'.

Don’t deny the change is on its way. Don’t be an ostrich and bury your head in the sand pretending that digital transformation is not rampaging through the sector. Could it be said that Countrywide’s “Back to Basics” strategy is evidence of just this?

I’m interested in your thoughts on this ahead of next week.

It’s that time of year again where we start saying goodbye...

When Kenneth Bruce, co-founder of Purplebricks, published an emotional post on...

This week, the obvious thing to write about would be easyProperty's...