A survey of 3,000 people by Zoopla suggests that 47 per cent of vendors believe the success of their sale was down to the ‘right’ estate agent.

Respondents were asked to rank the most important factors in securing a sale on their previous home.

“Nearly half of vendors believe selecting the correct estate agent and taking their advice on listing their home at the right price was the biggest factor to securing a sale on their home” says Charlie Bryant, managing director of Zoopla.

“Not only are these consumers acknowledging the insights agents have offered in these instances but also have an understanding that choosing the best estate agent and correct price at the start of their property selling process is crucial” he adds.

You can see further data relating to the research in the table below.

Meanwhile Zoopla continues to ramp up the promotion of tools which is says promotes estate agents to would-be customers.

The portal says its new AgentFinder tool, recently revamped to help match consumers with appropriate local agents, has seen a 62 per cent surge in use.

It also says its recent ‘crabverts’ - multi-media advertisements featuring its two signature hermit crabs - have been seen by approximately 90 per cent of ABC1 adults, equivalent to some 26.3m people. 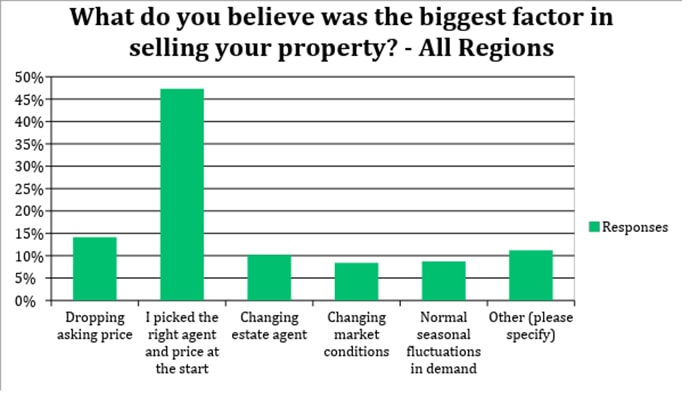 As debate continues over the merits of upfront fees against post-sale...

Sellers should try to instruct estate agents with the largest local...

Read all about it: Property supplement publisher up for sale ...

Johnston Press, the company which owns the i national newspaper and...