No doubt we’ve all seen the recent Purplebricks news - shares have, according to the BBC, ‘plunged after it slashed its sales forecast and announced the departure of two senior executives’.

I think there’s a strong argument to be made that the reason for this decline, momentary or not, is a lack of collaboration and therefore a lack of depth to the business model.

Purplebricks has announced that it expects sales for the current financial year to be between £130 million and £140 million, having previously forecast between £165 million and £175 million. In way of an explanation, the company has blamed a ‘challenging’ housing market, and ‘headwinds’ for its ventures into the Australian market.

I don’t doubt that both of these factors have indeed played a part in this drastic slash in profit forecast, but I believe a significant contributor has also been a failure to embolden the online agency business model through collaboration.

A while ago now, I wrote a series of articles about my amended version of Gartner’s now famous Hype Cycle.

For those who don’t know, the Hype Cycle is the predicted path of a new startup, business, or technology as it enters the market and matures.

It states that, at the beginning, anticipation and expectations are high. Indeed, they run so high over a very short period of time that, eventually, it reaches a tipping point and the line drastically drops to the Trough of Disillusionment.

Then, slowly, as the young innovation or company learns why it has fallen into the trough, it can climb the Slope of Enlightenment all the way to the ongoing Plateau of Productivity.

This recent news from Purplebricks suggests that it has officially fallen into the Trough of Disillusionment and has a tough battle ahead to find its way out.

My amended version of Gartner’s Hype Cycle, see below, contains what I call the Collaboration Curve.

As you can see, by jumping on the Collaboration Curve, the Trough of Disillusionment can be avoided altogether, offering instead a comfortable and manageable path to the Plateau of Productivity.

Furthermore, the shaded area between the Collaboration Curve and the Trough of Disillusionment, is what I call The Ego Void.

This is where those companies end up when they have too much ego to accept that collaboration and partnership is the best way to find success. 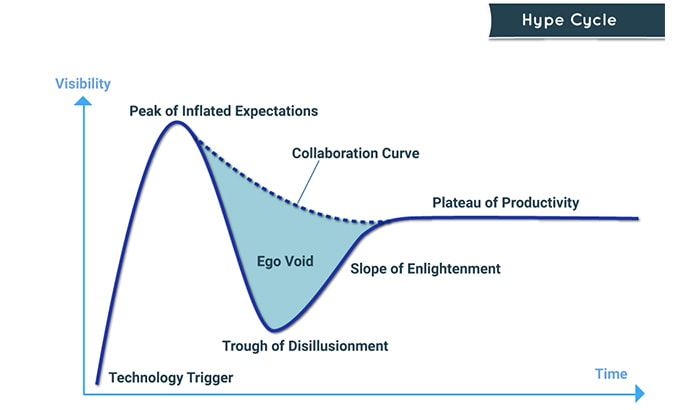 It is my belief that Purplebricks - and many more of the ‘Onbrid’ (my combination of Online and Hybrid) companies - are struggling today because they refused to accept that collaboration was the best way to add security, depth, and variety to their shallow, two-dimensional business model.

From here, Countrywide would have benefitted from a much-needed tech-enabled solution, and Purplebricks would have received nationwide distribution of its product.

Purplebricks could, of course, have kept up its day job, continued selling its own branded services to the public and then used this collaboration as additional revenue, galvanising its business model.

I understand the power of hindsight, but I don’t think Purplebricks was ignorant to this fact for all these years, I just think it didn’t see it as necessary, not a positive business move, such was its confidence in the continued power of its model.

But, as my colleague, Will Darbyshire, has written extensively about, the online hybrid model is innately flawed and limited; therefore unsustainable.

Many people are pointing to the overambitious scale and speed of Purplebricks’ expansion as the key contributor to recent troubles. I agree that this is true, but I would also argue that, yes, it tried to expand too quickly, but also that it was doing so from within the depths of the Ego Void, blinkered to the reality of the market around it, and lacklustre in its attempts to future proof its offering.

As Will said in his aforementioned analysis: “Given the opportunity again, we would unquestionably make moves to avoid this business model all together. It makes no sense. People buy houses, what, once every seven years? What sort of market is that to try and disrupt with price competition?”

Let’s see if egos can be swallowed and a sensible resolution can be found.

PropTech Today: Selling my flat - can I put my money where my mouth is? ...

It’s all very easy, talking and evangelising about the use of...

PropTech Today: What has happened to creative innovation? ...

I received a press release yesterday - one of many that...

PropTech Today: Stories from Australia - PropTech is like teenage sex ...

Last week, I wrote about the speed of innovation in the...