A new group called the Federation of Independent Agents has been set up as a network of like-minded independent agents who can collectively enjoy some of the commercial advantages of corporates.

Established by Graham Lock - a management consultant well-known in agency circles and the founder of online agency House Network some years ago - the FIA aims to give independents “a competitive advantage by utilising corporate style commercial discounts together with franchise grade support.”

It has yet to launch formally but the federation’s website - just gone live - pledges members will get “our exclusive range of approved suppliers which includes FIA member-only discounts.”

There would also be “personalised video testimonial to promote your approved membership status across your brand platforms.”

Only one agent per town will be allowed to join, to give a level of exclusivity and authority, while there will be training events and four conferences per year “including keynote speakers, product insights and sharing best practice with fellow members.”

Franchise, online and corporate agencies will not be allowed to join.

Lock told Estate Agent Today last evening that after a pre-launch announcement last week, there was a high volume of pre-registrations of “high calibre and well respected independent agents” from across the country. 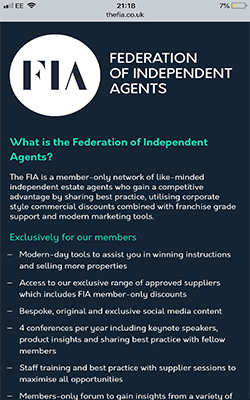 “Some 208 branches from 45 different brands have already registered to secure their exclusive territory ahead of their local peers” says Lock.

“The type of agents have mostly been those that operate between one and four branches but we’ve also had registrations from some very well known independent brands with a high number of outlets.”

He says he’s already received what he calls “duplicate applications” from different agents in the same town.

Lock adds: “Membership isn’t automatically granted meaning that agents can’t just pay their subscription and join, the standard of entry is high and by invitation only but for good reason that we want to represent the very best independent operators in the business, those that see this market as an opportunity to pull away from the competition.”

Lock says on his social media accounts that it took months of research and planning to reach the current stage, and that he wants the FIA to “build a membership organisation that will take independent estate agency to the next level.”

The high level of interest suggests the FIA may prove more successful at galvanising independent agents than the previous attempt to set up a network, the Charter for Independent Estate and Letting Agents, CIELA.

CIELA started recruitment in January 2017 and spent a year trying to build a critical mass of support - unsuccessfully. The FIA offering is more commercially-focussed, and appears not to have gone down the CIELA route of attacking corporates and online operators, even though those agencies cannot join the new organisation.

The Federation of Independent Agents trade group has unveiled a new...

“Multiple”members of the new trade body, the Federation of Independent Agents,...

The Federation of Independent Agents, the new trade group set up...

Over 12 agencies named as latest members of independents’ group ...

The fledgling Federation of Independent Agents has revealed a list of...