The head of an online agency has accused the National Association of Estate Agents’ conference of being “a sea of old white men with grey hair.”

The NAEA met for its annual conference in London at the end of last week.

Sam Mitchell, former lettings chief of Rightmove and now the chief executive of HouseSimple, made the accusation on Twitter.

He wrote: “Sat at the NAEA conference, it’s a sea of old white men with grey hair. Not sure this is the future of innovation.”

Mitchell was challenged in a friendly way by NAEA vice-president and former Humberts boss Ian Westerling, who tweeted: “I don’t think the sight of grey hair should be seen as a negative thing, Sam. NAEA Propertymark have also got a great apprenticeship scheme focussing on the next generation.”

Mitchell - who says he is himself in the “no hair camp” - retorted that his initial observation referred to “the lack of diversity and risk of group-think.”

A spokeswoman for the association told Estate Agent Today over the weekend: “The programme for [the] NAEA Propertymark Conference was packed with content from a range of speakers, addressing business survival and growth, while promoting practical tools, resources and solutions to the challenges agents face on a day to day basis. However, we are always looking for ways to improve the National Conference and take all feedback on board.”

You can see the tweets below: 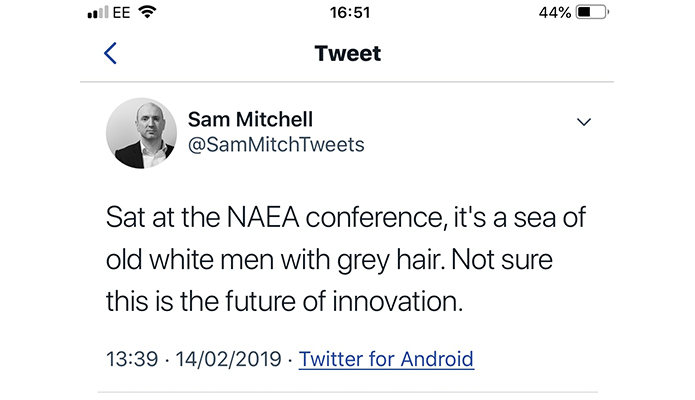 This drew a response from Westerling, which Mitchell himself then responded to. 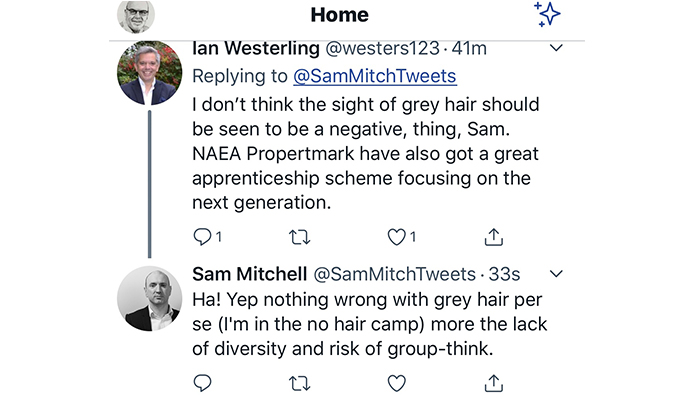 Poll: Is this a fair description of the NAEA?

The networking organisation Women in Residential Property has grown to over...

The first speakers have been announced for the 2020 conference of...

The government policies and enforcement plans for anti-money laundering measures are...