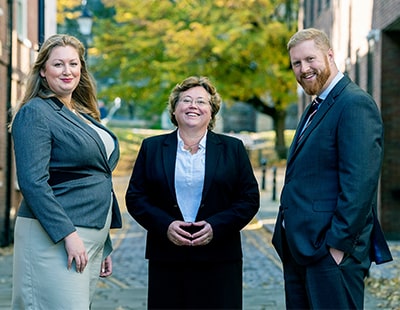 It’s not-so-unlucky 13 for national property consultancy Bruton Knowles which has opened its 13th office in the country.

The new office is in Cambridge and is to be led by returning partner Amanda Briggs (pictured centre).

She previously worked at Bruton Knowles for 10 years to 2006, during which time she managed offices in Leatherhead and Aylesbury, and provided support for the Birmingham office as it merged with James & Lister Lea in 2001.

Some 13 years ago she left to join Bidwells, and then moved to part-time consultancy in 2018.

Meanwhile Haart estate agency in Derbyshire has moved to an office that’s three times the size of its previous branch in the town - with a key new homes instruction one of the reasons for the expansion.

Insider Business reports that Haart was chosen by developer Wavensmere Homes to sell almost 800 homes on the former Derbyshire Royal Infirmary site; the scheme, with a total value of some £150m, is known as the Nightingale Quarter.

It breaks ground this autumn.

Haart branch partner Aaron Ottewell tells Insider Business: "The market here is strong, both within the city and surrounding villages, and our expert teams are backed by state-of-the-art marketing.”

And divisional sales director Claire Drewett adds: "This is a key development within Derby and one that we know is close to the hearts of many residents, so continues to create a huge buzz as the date draws closer for people to actually be able to purchase the properties - so this new office is going to be the perfect base for this.”

Challenger portal adds banking heavyweights to its board ...

A former chairman of challenger bank Monzo has joined OneDome’s board. Tim Brooke...