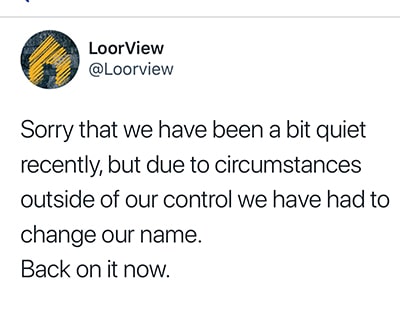 A new portal which had branded itself as “the UK’s first decentralised property listing database” appears to have had a setback before it’s even launched - it has been obliged to change its name.

Last week we gave details of YourMoov, a portal run by a so-far unidentified team of property industry and financial experts as well as software developers.

They promised to launch the portal “in the not too distant future” but were already tweeting and gave an interview to Estate Agent Today. However, yesterday the company tweeted with its existing branding design scheme but a different name - LoorView.

It is not know whether the name change was down to the original similarity with the Your Move estate agency brand, as some agents who contacted EAT suggested.

In any case, it appears the change was forced upon the new portal as the tweet announcing the change says: “Sorry that we have been a bit quiet recently but due to circumstances outside of our control we have had to change our name. Back on it now.”

YourMoov, now known as LoorView, says its USP will be the additional information available to users thanks to the site relying on blockchain data ledgers.

This technology has so far not been used by Rightmove, Zoopla, OnTheMarket or others.

“They pull the agents’ data and put it in one place - that's it. They offer stats and valuation tools but essentially they are the same. We are going to be different, with the addition of of our property files (which will stay with the property for ever) buyers will have much more information at their fingertips” a LoorView spokesman told EAT last week.

“Our mission is to create the UKs first decentralized property listing database. Agents will be able to upload ‘their’ properties, complete rental transactions via ‘smart contracts’, store rental inventories etc… and eventually transfer the title and legal ownership of property.

The LoorView Twitter profile says *Portal coming soon* and you can see the interview with a representative of the site here.

New portal YourMoov to launch in near future ...

A new portal called YourMoov and describing itself as “the UK’s...